I set off for Portugal in late June last year to visit the Tamera – School and Research Station for Realistic Utopia – in order to check out facilities for the International Communal Studies Association ICSA conference this summer. I was attempting the journey from northern England to southern Europe without resorting to flying, out of a concern for the environmental impact of travelling to academic conferences. (See: The Carbon Footprint of Conference Papers ) I haven’t flown for ten years now, but I also haven’t travelled out of the UK either in that time. So I was keen to see what the ups & downs of low (well lower) carbon travel were. The first leg of the journey required a stopover as train times and ferry times didn’t match up. So I stayed with an old acquaintance, alternative journalist Tony Gosling in Bristol, and took part in his Friday night politics programme on the local community radio station talking about communal living and its relevance to the current housing/homelessness crisis in the UK. 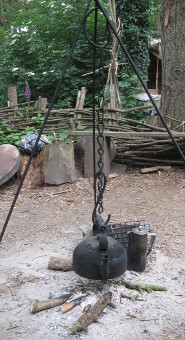 The following day Tony took me on a visit to one of the better known of what passes for an ecovillage in Britain – Tinkers Bubble in Somerset.  I had heard a lot about what Tony referred to as ‘the bubble’, but had never managed to visit. So was keen to see it and meet the folk who live in one of the earliest examples of low impact communal living in the country. As it turned out the visit was a bit of a disappointment. As we just dropped in, and no one knew we were coming, there was no one there to meet us – and when I say no one I mean absolutely not a single person anywhere to be found. (Turned out later that they had all gone off to a local festival and left two Spanish Wwoofers looking after the place who were out working in the woods.) We decided to wait and see if anyone would turn up and while we made ourselves a drink Tony told me about his involvement in the setting up of the community back in 1994. Tony had been covering the Twyford Down road protests and along with others including George Monbiot and Simon Fairlie wanted to find a way to make a positive statement about opposition to the current juggernaut of western society that was tearing up the countryside rather than just protesting against it.

The result was the purchase of 40 acres of mixed woodland, orchard and meadow and the settling of a dozen people on the land earning their income by selling organically grown produce at local farmers’ markets and selling sustainably produced timber which is felled by hand, logged by horse and sawn by a wood-fired steam-engine driven sawmill. While only meeting a couple of Spanish volunteers who couldn’t really tell us much about the place, I was left with the impression of a place that had seen better days and was in need of a bit of communal TCL. (Though I notice on their blog site  they have been doing some repairs lately.)

On the train to the ferry at Portsmouth I am left to muse on the restrictions on land ownership in Britain that mean that there have not really been any intentional communities been able to be set up on anything like a village scale.

One of the attractions of the train/ferry option over flying was the opportunity to watch out for whales and dolphins as we crossed the Bay of Biscay. Brittany Ferries have teamed up with the marine charity ORCA and not only offer special whale & dolphin spotting cruises , but have a team of marine scientists on every crossing carrying out survey work and giving talks to passengers. You do have to get up early if you want to join in the spotting. As the ferry approaches Santander its route follows the line where the continental shelf drops off to deep water and it turns out that whales like the deep water and dolphins like to patrol the edge. So clutching my binoculars I joined the handful of hardy spotters at 7am in morning and we are treated to a pod of fifty or so dolphins riding the bow wave of the ferry – a sight hard to imagine let alone see from 10,000ft high had I flown.

The rest of the journey was uneventful. Beautiful evening train crossing of the mountains in northern Spain to connect with the night train down to Lisbon. Then onwards by local train to Funcheira where I am met and whisked away the 20km to Tamera by Krista and Helena, who are two members of the Tamera team who will be dealing with all the practicalities of the conference. Funcheira station was my first experience of southern European architecture with all the texture and feel of a spaghetti western movie set. 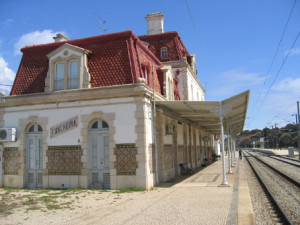 As we drove towards Colos, the nearest settlement to Tamera, we pass through a parched landscape of rough pasture, very rough pasture in some places, dotted with olive trees and eucalyptus plantations. The Alentejo region is suffering from encroaching desertification which in turn leads to depopulation making it one of the least populated parts of Europe. We stop off in Colos for coffee and to pick up some supplies and then head the last 4km towards Tamera. I have a 101 questions about what being a ‘Research Station for Realistic Utopia’ means in reality – but they can wait.

A version of this article appeared in the November 2015 ICSA Bulletin. Part 2 of the Trip is here.