There seems to have been some circumstances more than others that led to the formation of communes by those involved in counter-cultural rock music scenes. One of these would appear to be the point where rock music overlapped with performance art. Often the line between rock music and performance artist was blurred.And sometimes the line between music art and life became blurred as well. From the Exploding Galaxy ‘love-anarchist-dance-company’ through the Principal Edwards Magic Theatre to Rockbitch

“We play rock. We live together in a commune. We love each other. We have sex together. We’re mainly women. We are exactly what we claim to be. We’re what you get when strong intelligent women decide to free themselves from the expectations of other people and live closer to the heart to truth to sex. We believe in liberation through sexual freedom and through the evolution of mind and spirit through exactly that. The Rock Bitch side of things was an accident. It’s what you get when the sex witches happen to form a band.”  Babe This is Rock Bitch

Formed in the early 1990’s Rockbitch lived on a commune at Metz in France which was envisaged as a feminist, matriarchal, tribal retreat where women could explore their sexuality and psyche. The band had grown out of previous English bands Cat Genetica and Red Abyss who drew on jazz, funk as well
as rock influences. Over time the bands personnel changed becoming nearly all women and its music became harder edged with more punk and metal influences. About to give up playing due to what they saw as the apathy of male-dominated rock audiences at what was to be their final gig the group decided to put some of the wild orgiastic pagan sex of their home life into the stage act. This went down a storm with some of the audience and they decided to continue touring in order to spread their pro-sex message. 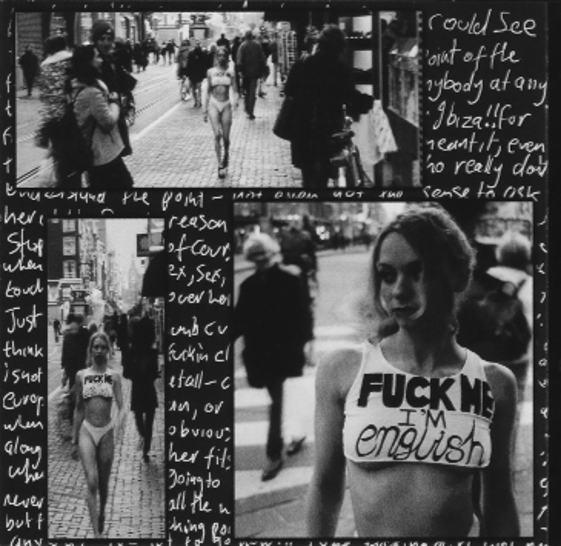 The group went on to tour extensively throughout Europe with what became a mutli-media rock/performance art / sex show. The commune/band had been joined by this time by two performance artists who worked together as a sexual performance artist and gonzo-camera team describing themselves as ‘Archetypes of the Dark Feminine psyche’ and personifying Kali, the Hindu Goddess of death and Erzulie, the Voudoo Goddess of Love.” The shows included closeups of stage action projected on to a screen at the rear along with pre-prepared art videos of subject matter relating to the songs. These included graphic and disturbing images of child clitoridectomy, public stonings of adulterous women, binge/ vomiting models,etc. The most infamous part of the stage act was the so-called “ Golden Condom” contest. Which involved throwing the golden condom out into the audience and whoever caught it (man or woman) being taken backstage for sex with one or more band members.

“The band and the community have always been inextricably linked – changes in one were reflected by changes in the other….Our free-sex way of living, our attempts to promote the ancient understanding of sex as a spiritual path, our striving toward a polysexual intimacy within the community, unhindered by jealousy (many persons left, men in particular,
who couldn’t deal with the level of honesty this required)…all of this was a constant theme within our music and lyrics.”

Rockbitch recorded two studio Albums. Motor Driven Bimbo in 1999, which received critical acclaim in many countries and the goth-influenced Psychic Attack, which was never released. The group came under increasing attack as their popularity grew. The attacks came from all sides; authorities in the towns and cities where they played increasing tried to censor the bands act and when that failed turned to banning them completely. They were attacked by both right-wing Christians and feminists. They were sabotaged by male bands on the same bill and suffered the rampant sexism and hypocrisy of the music industry.
Following mounting pressure from cancelled gigs and continued attacks from the authorities Rockbitch ceased performing in 2002. Later that year a 30-minute documentary on the band was broadcast on BBC Choice and a further, hour long documentary was broadcast on Channel 5 in 2003. When they stopped playing the band issued a statement about their future intentions. Which included “The commune is not splitting up, no way. Our lifestyle and craft will continue as it has always done. Rockbitch will be reduced (elevated maybe?) to an internet presence.” They launched their own website www.rockbitch.com. In 2005 they reemerged under the name MT-TV for a tour of the UK and the USA. This was a “music-only project – no sex or nudity of the Rockbitch days.”

“When we first began our show, we were trying to make a visual and musical statement about the way in which women and their sexuality are portrayed in every medium within Western culture We wanted to express our responses to these perceptions, and we wanted to have fun – none of these contradict each other ! It was apparent to us that an extreme double standard regarding male and female sexual stereotypes was still an ongoing, unresolved issue – both within the structure of society, and in the minds of the public and feminist movement alike.”