After our unscheduled stop off with Clive and June we head back across the border into England and arrive at Berrington Hall in the middle of the afternoon for the 40th birthday celebrations of the Crabapple community set up back in 1975. We park up in the field at the top of the drive and while Mike sets off on a mission to find a bed for the night I tag along on the back of a tour of the gardens. 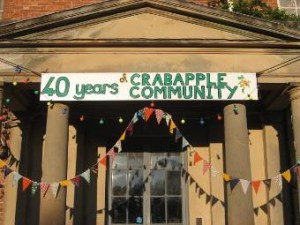 Over the years I have been an occasional visitor to the Georgian Rectory turned ‘behaviourist’ inspired commune and know a fair bit about the early history of the group – see Walden 3.2 for more info on the founding of Crabapple – and know that they had a really difficult period of low membership  a number of years ago, so I was keen to catch up with the more recent history and revival of the community. Exchanging greetings with old acquaintances at each twist and turn of the path I finally catch up with the tour guide in the middle of the walled garden as he is giving a brief history of the 40 years of communal gardening that had taken place there. The highs and the lows and fads of growing your own veg – the current low being how to bring back into cultivation a grown out and weed infested permaculture experiment that was in danger of taking over half the garden. Following the tour becomes ever more difficult as I get distracted into conversation with more old friends who I haven’t seen for years and get introduced to old communards who I never met all those years ago. So I decide to catch a later tour to see the new biomass boiler and solar PV array and head off to the dining room for some serious catch-up chatting.

It was great to meet so many old connections from what I now call the communal diaspora – an ever growing collection of people who ‘know’ from experience what communal living entails and despite whatever differences we/they may have had in the past all share a similar common experience that binds us across time and space.  It was interested to observe the different reactions of some of the former members of crabapple as they wandered round their old home; some keen to engage and enjoying seeing the place again, others tentative not quite sure of their place – perhaps wondering if there were ghosts of communards past lingering somewhere…..

And the party, well it had it had some great highlights; In the dining room and front room there were some stunning black and white photos from various periods of the group’s history. We sat and watched a 1980’s TV programme featuring two of the young women who had grown up at the community. There was a session with three of the founder members who to their credit were not entirely thrown by the question “What was it you were thinking all those years ago?” ……and there was a bonfire, good ale, good food, good company and generally a good time had by all. 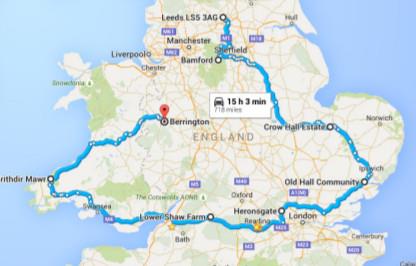 So after 7 days, 700 odd miles, calling in at 8 communities crossing 5 decades of communal history what had we learnt about communal living in early 21st Century?

Well…. Communal living is still here and going strong, that it is resilient enough to last 10,20,30,40+ years – though there might be a 25 year communal itch that groups have to get through – that after having had numerous tours it is clear that places have a remarkable amount practically in common, that despite there no longer being any ‘communes network’ there is a clear common culture that can be traced from place to place, that places seem to have the ability to re-invent themselves – sometimes on more than one occasion, that there is an incredible strength among members of groups who manage to carry on trying to ‘build their dream’ even when it is clear that the dream is more illusion than reality. That the ideas that are nurtured and tried out first in communes slowly and surely drift out into wider society, that out on the rural fringes and in the cracks of the urban landscape there are still places where a different way of living is being tried out.