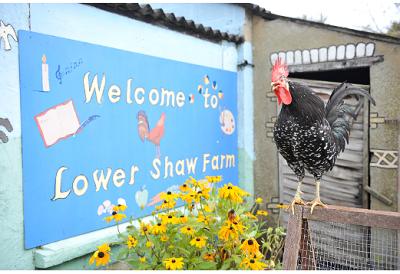 We pull into the little carpark at the front of Lower Shaw and are greeted by a brightly painted Welcome sign and a chalkboard welcoming us to Breastmates and Yoga. The place seems deserted, but for a group of young mothers who we later establish are the Breastfeeding mothers group. After wandering around the gardens, sheep & pig pens, 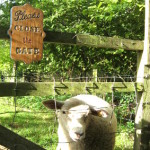 looking at the old dutch barn – now an adventure playground of sorts. We finally venture into the house and make ourselves a cuppa. Mike remarks on the lack of any security – a far cry from the cctv paranoia of Heronsgate two hours ago. Rosa, who grew up there,  arrives and says that her father Matt probably forgot we were coming they have been really busy with groups over the last couple of days.

Matt Holland, who now runs Lower Shaw with his partner Andrea, arrives an hour or so later – he had forgotten we were coming – he had been taking Andrea, who was on the way to Lebanon to visit older daughter who was working in a refugee camp for an aid agency training refugees in how to run refugee camps, to the Airport. Over another cuppa we catch up with some of the recent history of the place. 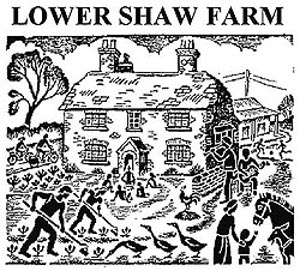 Lower Shaw Farm has had a somewhat chequered history. Started in 1975 in its early years it was run as a community development centre with a paid ‘warden’, Dick Kitto, who ran the place and the farm became the host to a number of groups in the early stages of their formation; including Education Otherwise and WWOOF. (for more info on the early years of Lower Shaw see: Communal Family Trees.) It was then for a period run as an intentional community developing various courses and events. It had nearly closed on a couple of occasions and Matt told how it had come back from the brink of being repossessed by the council and has now established itself as a local community resource-city farm-community centre and kids playground. In its latest incarnation Matt tells us that “People say that there is more’ community’ now than when it was a ‘community’.”

We sit and chat over dinner – rustled up from leftovers by the couple of French woofers. Mike asks what is rapidly becoming our stock question “what is your one favourite thing about communal living?” Rosa’s answer was that growing up around loads of other adults gave her a confidence in dealing with people  that her peers in her teenage years simply didn’t have. Matt after some prevarication turned his forgetting we were coming into a little homily about how in community people muck in and things get sorted. And how when he was young he never understood the little sayings like ‘Many hands make light work’ until he had some communal experience that made sense of it. Rosa said if she was answering for Matt it would be that his favourite thing was the whole variety of people that you meet in communities – life is never boring in community. This sparked memories for Mike who said yes even on the darkest days at Laurieston his ex-wife Tina would say “Well at least it’s not boring!”

When we leave in the morning Matt appears to be simultaneously  baking bread, organising Wwoofers and checking in with the local mechanic and french racing car mechanic/woofer who are giving the shiny red tractor a service. His parting comments are that Lower Shaw “may look Ramshackle on the outside, but it has shit-hot organised inner core.”