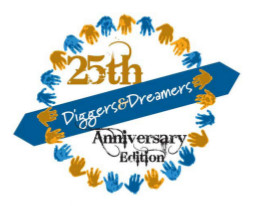 What do you say when you get a call out of the blue from old friend inviting you to go on a tour of communes, Just for the hell of it?  “We could write an article for the Guardian about it ‘1970’s Communes : Still Trucking after all these years!’.”  My initial reaction to the call from Mike Reid former founder member of Laurieston Hall, now retired and living in Sheffield, was along the lines of; not-really, too-busy, not-just-for-the-sake-of -it, how-boring-is-retirement?, nowhere-will just-let-us-drop-in-without-a-reason – let me think about it…….  After ignoring Mike’s email for far longer than I should of I gave him a ring and we concocted a trip based round the 25th anniversary of Diggers & Dreamers, where we would attempt to visit a commune / intentional community set up in each of the last five decades back to the 1960’s with a view to seeing what was the same and what had changed with communal living over half a century. (Mike is my partners ex from nearly 40 years ago – which she says me going on a week-long ‘nostalgia jaunt’ with her ex is just a bit weird. But that I probably have more in common with him now than she does. )

Day1 – Low Impact in Leeds
And so that’s how I found myself setting off on a sunny September Monday morning from home at Forgebank Cohousing heading for the train with a rucksack laden with more stuff than I have carried for a long while and an odd assortment of stuff at that; Tent, our son’s lightweight tent that I have never put up – hope we don’t end up anywhere having to erect it in the dark – self-inflating roll mat, sleeping bag, a set of D&D directories covering the last 25 years, laptop, camera, phone, digital recorder, clothes, wash bag , six Diggers & Dreamers tea towels and six bottles of Diggers wine picked up at the 5th annual Diggers festival in Wigan as gifts for the intentional communities we are setting off to visit. – as I walk down the pedestrianised street Sarah, one of our neighbours, asks “So where are you off to?” Somewhat stumped for a reply I answer “Off on a rather crazy road trip to Pembrokeshire via Leeds and Ipswich!”

Met by my Road Trip companion Mike in the short stay carpark at Leeds Station (2minutes to spare on the parking ticket.) We set off through the northern metropolis that Leeds has become – refuse to use the Tory tainted phrase “Northern Powerhouse” – our route through the winding one-way traffic  is accompanied by the dulcet tones of the cars Satnav – Proceed ahead 300metres then bear left. – .“I don’t use it very much so I still find it quite exciting. Not sure I have put the right postcode in, but we’ll see.”   Twenty minutes later our robotic female map reader declares “Turn right and you will have arrived at your destination.” And we did. 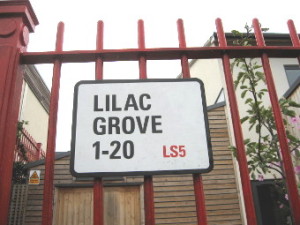 The sign on the brightly painted school railing says Lilac Grove, which conjures up a picture of fragrant suburban gardens. But LILAC is actually an acronym for Low Impact Living, Affordable, Community. We try the front door on the Common House which is locked and while Mike tries to ring our contact, Lara, I wander round the into a green central courtyard space  and bump into our host who for a moment confuses me with a man coming to pick up a load of ‘Pub chairs’ that they are trying to get rid of having just bought some stackable replacements for their dining area. When we resolve that “no we’ve not come to pick up chairs” – we are jokingly still offered as many as we can carry to take away with us.

Lilac is the newest of the communities on our itinerary newly built in 2013. There are 20 units some houses some flats, all constructed using the modcel strawbale building method on the Cohousing model, with a groundbreaking mutual ownership structure that helps make the place more affordable. After a quick cuppa we get a tour with Lara and Eden who work from home and so end up as regular tour guides. As well as the common house the tour takes in the laundry, workshop, gardens, allotments and pocket park before we venture into one of the three storey blocks to see inside Laura’s flat.

We stumble through our chats with Lara & Eden, not having really thought through yet what it is we are trying to find out from each group. So we cover the usual questions anyone asks when they visit somewhere new. We learn that the communites energy use is so low that they meet  the standard for passivhaus without the buildings being built to that standard. Due mostly to the members being ultra eco when it comes to turning the heating on – “We just put on a jumper when it’s a bit cold.”  The two bed flat we are shown round is spacious and feels really nice and cosy with a spectacular view across the community from a substantial wooden balcony. Lara tells us that since she moved in she has not suffered from the niggly wintertime colds that she used to get in her previous terraced house.

Before leaving we have another cuppa with Erica who has a flat in the same block and get a bit more of the history of the place and the ups and downs of trying to set up a 21st century intentional community. Though my guess is we will find that that the ups & downs haven’t changed much over the years. – Erica tells us of the struggle to get to ‘perfect’ decisions which took up much of the groups meetings until a visit from Diana Leafe-Christian,former editor of the American Communities magazine persuaded them that if a proposal was “Good enough for now and safe enough to try” then you could stop the seemingly endless discussion and give it a whirl. Which could almost be a motto for our road trip. And on that note we headed off to stay the night at Mikes place in Sheffield.