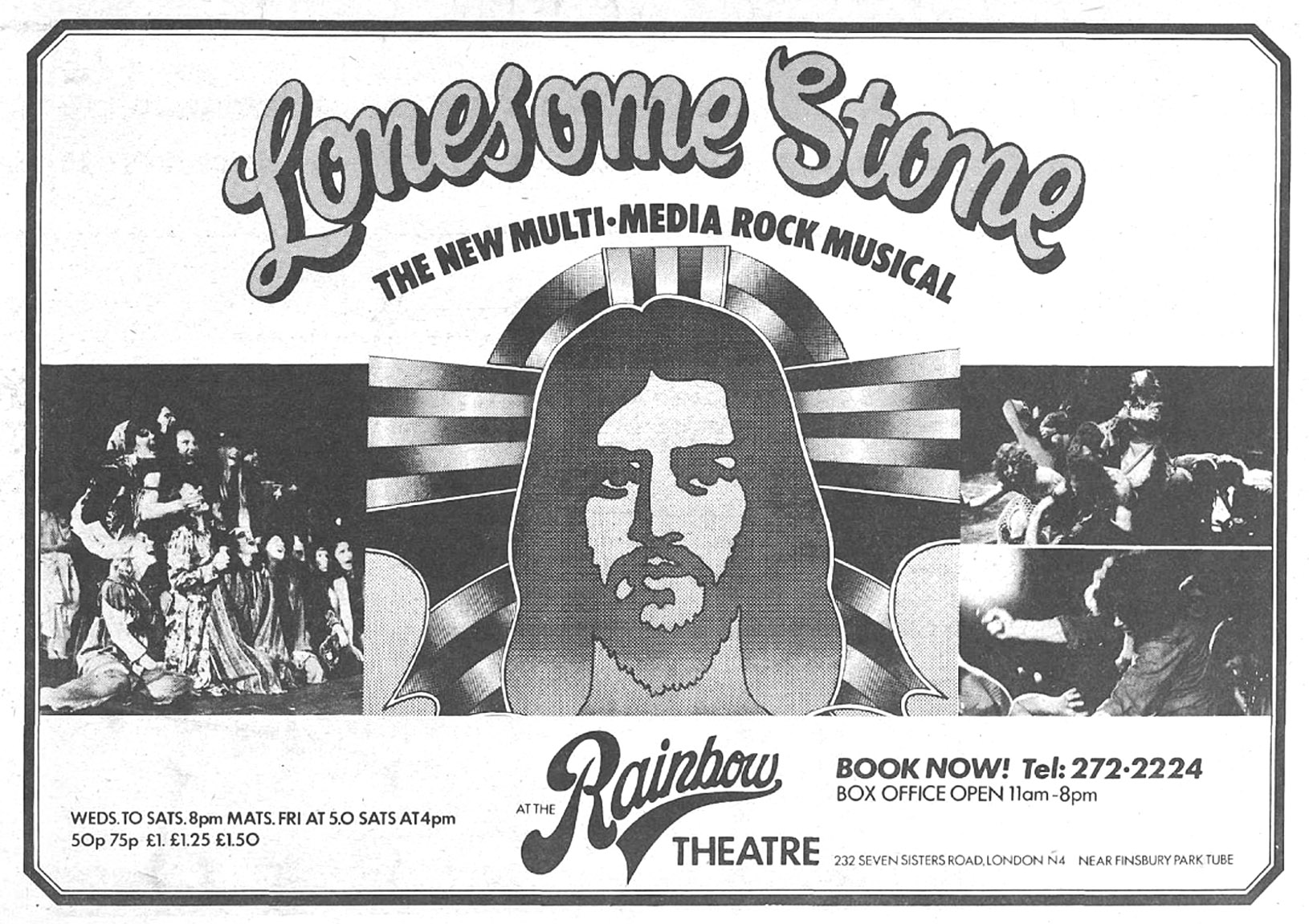 On the 11th July 1973 a new multi-media rock musical entitled Lonesome Stone opened at the Rainbow Theatre in Finsbury Park London. Following hot on the heels of other Christian based rock operas like Godspell and Jesus Christ Superstar which had opened in London in the previous couple of years Lonesome Stone told the story of a hippie seeker finding God in late 60’s San Francisco. The new musical had been written by members of the rock group The Sheep who had been touring the UK with a stage show called ‘The Jesus People Come Alive’ since they had arrived from the States in Nov ’72.

The Sheep were the house band for the Milwaukee Jesus People Ministry set up by Jim and Sue Palosaari in from Wisconsin where they had run a coffeehouse, newspaper and a communal school called the “Jesus People Discipleship Training Center” with 200 members. In 1972 the Palosaaris and thirty members flew to Scandinavia at the invitation of the Full Gospel Businessmen’s Association where the band recorded its first record in Helsinki, Finland, in Finnish. From there the group spent the next six months touring through Europe. After spending a month in Berlin in an art deco mansion the group found themselves with “No money no prospects in someone’s house in Holland” the group received a telegram that said ‘Come to England. Money no object’. 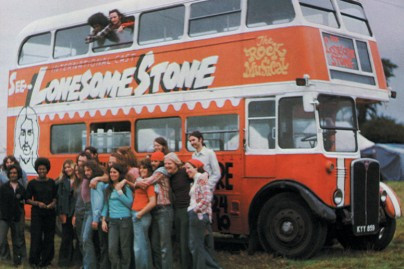 The invitation was from property developer Kenneth Frampton whose Deo Gloria Trust helped set up the group, now calling itself the Jesus Family, in a large four storey house in Norwood, NE London. (I think this was the same property developer who owner the squatted houses on Bishops Ave featured my previous post.)  Frampton, a Christian Philanthropist and member of the Plymouth Brethren, had previously been instrumental in welcoming another American evangelical Christian group to England. In July 1971 he had offered a large factory building that he owned in Sherman Road, Bromley rent free to the Children of God who used it as the base for their activities in Europe. Frampton’s two sons joined this new group, but before the year was out he was having serious misgivings about his generosity having learnt more about the sect’s background and leader David Berg. But he was reluctant to evict the group while his sons were still members. His invitation to the Palosaari’s was an attempt to promote a rival group and undermine the Children of God’s influence

After a week long run at the Rainbow Lonesome Stone toured throughout the UK and Europe including many US Air force bases. At this time Jim Palossari, came into contact with James Holloway who was involved in a Christian community in Suffolk which supported its own rock band called All Things New. The two of them had both thought of holding a Christian Music Festival and the result of the meeting was the first Greenbelt  music festival over the August bank holiday weekend in 1973 at Prospect Farm near Woodbridge in Suffolk financed by Frampton’s Deo Gloria Trust. The Jesus Family returned to the States in 1974 where members were instrumental in setting up a further commune on Vancouver Island in Canada.

Another communal musical saw the light of day (well nearly) in 1973. Just before he was about to depart from the Findhorn community in Scotland David Spangler was invited to a conference in London for which, inspired by the success of the musical Godspell, he decided to write Findhorn’s very own musical based on the “evolution of the Christ Consciousness” to be called Freedom Man.There was already a group at Findhorn called the New Troubadours (affectionately know as ‘the Troubs’) that had grow out of ‘fun nights’ started by Findhorn founder Peter Caddy back in 1969.

” The music of the New Troubadours came out of a special time. In 1969 the community numbered around fifteen people, and as a couple were musicians, Peter Caddy started having an occasional ‘fun night,’ a time when the members would gather in their new community centre and put on impromptu performances of music, poetry or comedy. I arrived in summer 1970 to discover I was at the leading edge of a surge of people coming to join. In a matter of months, the population rose to 150 people. Among these were artists, musicians, actors, and craftmakers, and under their influence the ‘fun nights’ became weekly events…. I felt a desire to write new songs that expressed the joy and vision we were experiencing in the community. At first with Lark Batteau then with Milenko Matanovic, I wrote what one friend laughingly called ‘mini-lectures set to music.’ These we performed at fun nights in the community as a way of celebrating the spirit we were all feeling.”   David Spangler

Written over a three day period with fellow Troubadour Milenko Matanovic Freedom Man included songs with titles like; Let New Worlds Grow (the Song of the Devas), In the Beginning, Where There Is A Will, and Song Of The Avatars. In the end the musical was not performed at the conference, the songs instead becoming part of the repertoire of the New Troubadours. Recently Findhorn have released a ‘best of’ compilation of songs by the New Troubadours – See here for a review by long term Findhorn collaborator Mike Scott of the Waterboys