There seems to be a sort of family history urban myth that  you find out more about people after they are dead than when they were alive and then regret not being able to have those conversations you would have had “had you known what you know now.” For years I had gone around thinking I was the only member of my family who had been involved in left/radical/alternative politics – only to find through family history conversations with my mum & dad that; my maternal grandmother had a photo of herself taken outside the Women’s Sufferage Society’s shop in Leicester in the early 20th century, that my paternal grandfathers brother had been a signed up member of the communist party back in the 1930’s and that my grandfather had been a regular visitor to a friend of his at the Leicester Garden City (It was always know locally as ‘the Garden City’, probably because that is what the bus destination said, though in reality it was only a Garden suburb.)

Hidden away in the suburban sprawl on the east side of Leicester Humberstone Garden Village is a somewhat unique housing scheme. Unique – not for just being an early example of a garden suburb development- predating both Letchworth & Hampstead , nor for reaching its centenary largely with its original structure intact, But for being the only garden suburb ever to be be built by the members of a workers co-operative.

The workers at the Anchor Boot and Shoe Co-operative Society whose co-operatively run boot and shoe works were in Asfordby Street, Leicester were inspired by the works of Ebenezer Howard and the embryonic Garden cities movement. Contributing a percentage of their wages to a building fund they set up the Anchor Tenants Co-partnership.

Tenant Co-partnerships were an early version of housing co-operatives. The first,Tenant Co-operators Ltd, was set up in 1887 with the idea of applying the principles of the co-operative retail movement to housing. It aimed to build or buy houses all over London to let to tenants at local rents, financed by a combination of Public Works loans, small investors and shares taken out by the tenants themselves. The rents would be set to cover maintenance, loan repayments with any surplus ‘profit’ being credited to tenants as a dividend. It was hoped that in this way the tenant could build up a share account that would eventually be equivalent to the value of their house; in this way working people could own their own homes and instead of having to sell when they wanted to move they could simply transfer their shares to another co-operative housing scheme. A number of schemes throughout the country were set up using this model and nearly all laid out on Garden City principles. (see Derwentwater Tenants Co-partnership 1910 , Burnage Garden Village 1906, Wrexham Garden Village 1917 and Brentham Garden Suburb 1905 ) Parts of both Letchworth Garden City and Hampstead Garden Suburb were also developed by tenant Co-partnerships.

The Anchor Tenants Co-partnership purchased a block of land on the edge of the village of Humberstone, just outside Leicester.The first houses were built and occupied in 1908, and by 1914 a total of 94 gabled cottages had been built on streets such as Lilac and Chestnut Avenues, Laburnum Road, Fern Rise and Keyham Lane. Anchor employees were let the houses at a nominal rent. The area became a self-contained community; with bowling green, tennis courts skittles, a cricket pitch and play area for children, church, shop and community hall. The motto of the Association was ” “Not Greater Wealth, But Simpler Pleasures.” 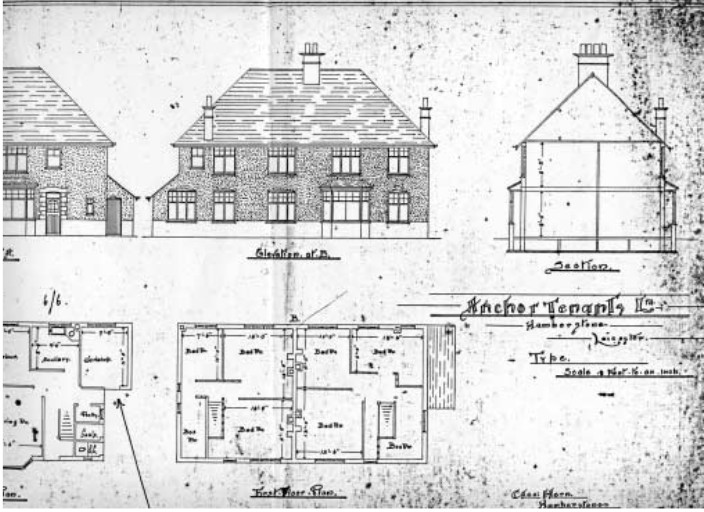 The Suburb thrived as a slightly separate enclave up until the late 1930’s when the Leicester City boundary was extending and the surrounding area built up.

As part of the suburb’s centenary celebrations in 2002 the Association published a Victorian Studies MA dissertation by University of Leicester student M D Forrester on the history and background to the garden village.

The First World War dealt the Suburb a major economic blow; the effects of the Second World War almost destroyed the social structure of the estate. As younger, second generation members returned from armed service and munitions factories, this more travelled and worldly generation found difficulty in settling back into the old way of life: for many of them, it was simply not what they wanted. The war also depleted the Suburb’s financial resources: the City Council insisted that the estate take out insurance against War Damage.

The gradual deterioration of the physical, economic and social fabric of Humberstone Garden Suburb has been due to many and various factors, over many of which the members had no control. The attempt to be autonomous
whilst dependent on outside resources and having no control over the surrounding environment, could never have worked. In any case, in the early days, the Management Committee made many mistakes, the most fatal perhaps the decision not to allow Billesdon Rural Council to make up the roads for nothing.

Talking to older residents, it is evident that much of the early community spirit does still exist. The estate is still administered by a Management Committee and run on co-partnership lines, although much of the original guiding philosophy and raison d’etre have either been forgotten or had to be abandoned.

During my research for my book Utopia Britannica I walked in my grandfathers footsteps, so to speak, around the streets of the garden suburb and was stopped by an elderly resident who wanted to know “Was I from the electricity board?”. When I told her I was interested in the history of the place and that my grandfather had been a regular visitor in it’s early days she invited me in for a cup of tea and told me her and her late husbands story of how they came to live there and what a lovely place it had been (and really still was when she thought about it.)