A couple of weeks ago the Guardian ran a story with the headline  – Inside ‘Billionaires Row’: London’s rotting, derelict mansions worth £350m – about the large number of huge empty mansions being left to rot while there is a housing crisis in the capital. It was accompanied by video footage and photos by Graeme Robertson  of the decaying  properties.

One particular photo caught my eye of overgrown and decaying tennis courts at a property known as The Towers which whisked me back to 1975 when Bishops Avenue was still only called ‘Millionaires Row’ and a tale of squatting in London’s most exclusive address.

It was Corinna Seeds, who ran the prison theatre company,Stirabout, who first ‘discovered’ the big house set in acres of gardens in Bishops Avenue. As far as we could find out the house had been empty since the1920’s, something to do with an American heiress who had died and left the house in legal-limbo-land. Undercover of night we moved in, changed the locks and pasted the squatters occupation notice on the door. Half an hour later a blue flashing light approached along the driveway – it sped right past us and further along the drive to a cottage where a caretaker, who had been kept on by the estate,(For 50 years?!) had fallen down the stairs and broken his leg coming to investigate the strange lights in the big house. Next morning the local police inspector turned up, accompanied by the caretaker with his leg in plaster, we exchanged legal pleasantries and they went away. Later in the day the inspector returned on his own.Turned out his daughter was squatting in Streatham and he was remarkably sympathetic – for a police officer – he told us that the estate would get us out one-way or another, probably by declaring the house unfit, or a fire hazard. However he had just raided three houses further up the road and busted members of the Children of God sect for a rental TV scam they had been running. As far as he knew the houses were empty and we would be alright there. “Should he catch us breaking and entering of course he would have no option ………” after a month camping in the mansion, with no electric, gas or heating, – very romantic, but bloody cold – we decided that he was right and moved to ‘Kingsdene’ the smallest of the three properties on the corner of Hampstead Lane and Bishops Avenue, opposite Kenwood House, which were actually owned by a property developer supporter of the Children of God who had gone bust.

The Hampstead Lane squat turned out to be the most stable address some of us had in London, it lasted over 18 months. Because the houses were owned by a bankrupt developer they were in the hands of the ‘official receiver’ with whom we came to an arrangement – if we paid the rates and didn’t trash the place he wouldn’t hassle us until the whole bankruptcy thing was sorted and he had a new buyer for the houses. When we first moved in the well-to-do neighbours had assumed that we must be rock stars and were subsequently shocked to discover a bunch of squatters had moved into one of London’s most exclusive addresses – a story broken to the country by the ITV national news who doorstepped us early one morning with a full camera crew and reporter. Needless to say we didn’t look our best at 8am on a monday morning. Having been outed by the press we decided to go on a bit of a charm offensive 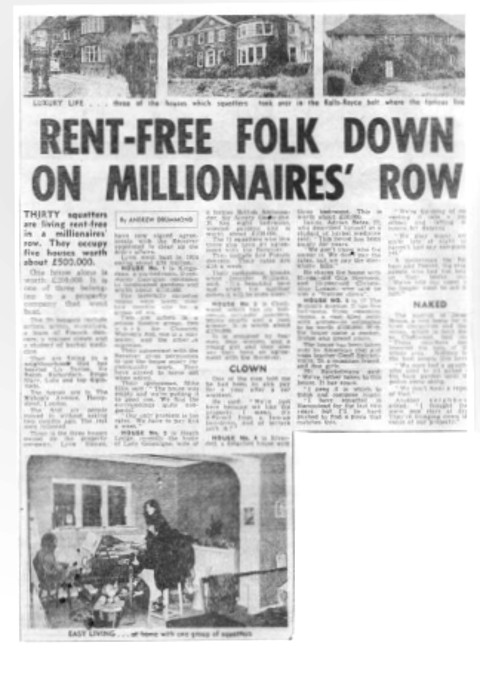 . We tried to get some more positive press coverage in Time Out and on Radio London. We gave ourselves a name – ‘The Golden Spiral Community’ and invited the locals round to talk to us. To our surprise a few actually came and we tried to get across to them that we were useful members of society who just couldn’t afford London property prices; adventure playground workers, women’s refuge staff, running a theatre company that toured prisons (we had Home Office security clearance!). Not dirty hippy squatters at all. I’m not sure many of the neighbours were convinced and the effect of all the publicity was to attract a motley crew of North London would-be squatters and streetlife to our door. Most of whom moved in to one of the other properties on the site – we had chosen the smallest house of the three (only four bathrooms) partly because we thought it the most ‘defendable’. The house next door was so big that people could move in to one end without ‘residents’ in other parts of the house finding out for a couple of weeks. We paid the rates, a considerable sum at the time, by renting the living room out as a rehearsal space for theatre groups and the triple garage to a couple of mechanics.

Looking back living on the corner of Hampstead Heath in the summer of 76 now seems somewhat idyllic – we turned over formal flowerbeds to growing organic veg, (not very successfully as there was a drought that summer.) had picnics on the lawns of Kenwood House, held parties full of hippies and escaping battered wives, hosted various meetings, therapy weekends, a Peace News Potlach.( at which incidentally I crossed paths with my future partner Catriona – though we didn’t know it at the time.)….. a stream of people came and went, but we managed to keep the core of a communal household together; Jan, Mick, me, Sheila and the kids, Lorna and her puppets. We had fairly regular communal meals, shared childcare, shared our beds, all went on a brown rice diet to pay the telephone bill, had communal readings of The Hobbit, listened to the Sex Pistols burst forth on the radio, flicked through the collection of Jesus-loves-you propaganda pamphlets the Children of God had left behind in the basement, taught ourselves basic DIY skills to stop the roof leaking and unblock the drains.The gardens – which included an ornamental pond and tennis courts – were taken over at one point by folk from Tipi Valley in Wales, who had heard that the BIT crashpad in central London had closed and so they had come with a plan to ‘rescue’ London’s homeless hippies and take them back to Wales with them along with a horse saved from the knackers yard. In the meantime they set up their tribal encampment in ‘our backyard’ and proceeded to demolish the fencing for firewood – progressing later to the staircase in the mansion squat next door !.

When we had been there for nearly two years the insecurity of not knowing when we were going to be evicted unsettled us and when we found ourselves acting as surrogate estate agents showing potential buyers around we decide the time had come to go. We said good-bye with one final party and went our separate ways. All this happened in what now seems like the heyday of the squatting movement before the Thatcher years, before the various Acts that have increasingly criminalised squatting and made the homeless into outlaws. And how has Bishops Ave fared in the meantime?  – Well not a lot has changed has it.