(Before I start this post you need to know that I don’t eat bacon. Once in my late teens I ate some that made me violently sick and whenever I tried it afterwards my body would start to instinctively wretch. So I avoid it whenever possible – I like the idea and the smell of bacon, but my stomach clearly has other ideas.)

I know you are supposed to be able to remember exactly where you were when you heard of some great historic moment that happened in your lifetime – But I’m sorry I don’t know where I was when I heard : man had set foot on the moon (Probably at school), Kennedy had been shot (Probably at school again.), John Lennon was shot – (Don’t know, don’t really care – was a WHO rather than a Beatles fan.) However I do know exactly where I was and who I was with on February the 11th 1990, the moment that Nelson Mandela was released. 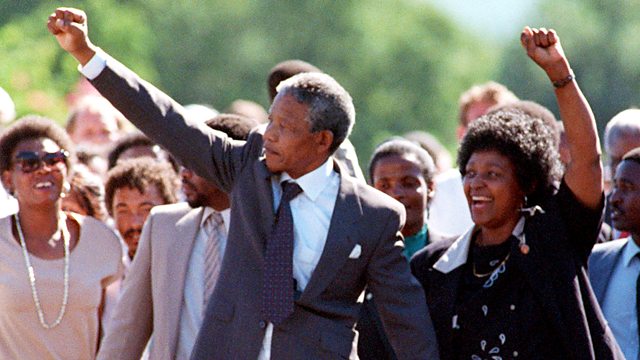 We were huddled round a tv screen in Kath Rowley’s house in Healywood watching the live coverage of his release after having spent the morning holding a celebratory demo in the centre of town attended by members of People In Common and other friends and supporters of the Anti-Apartheid campaign. We played ‘Free Nelson Mandela’ on a beatbox, sang Children of Africa and Nkosi Sikelel’ iAfrika and there were a couple of short speeches by Mike Hindley MEP and by our friend and guest of honour, Joyce Piliso.

After having spent a decade avoiding buying South African Goods, asking “Where are these oranges from?” in the local green grocers ever time you went in, getting accidentally arrested outside South Africa House on a day trip to London (When a whole demo you have wandered into sits down in the road you don’t have much choice!). 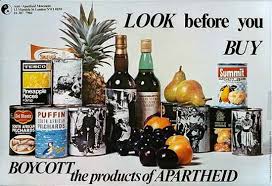 Years spent donating to Anti-Apartheid funds – making the choice whether your donation was to be used for peaceful protests or whether you were happy for it to support UMkhonto we Sizwe, the ANC’s armed resistance. After all this the release of Mandela was a cathartic moment -To have shared it with Joyce Piliso was a real privilege.

I had been introduced to the politics of Apartheid in something of a baptism of fire back in November 1969 aged twelve. Our school rugby teacher Dave Lyons, an ex-Leicester Tigers player, had arranged for some of us who played for the school team to get tickets to the Midland Counties East match against the touring South African Springboks at Welford Road.

On arriving near the Granby Halls we were faced with a huge 2000 strong crowd of Anti-Apartheid demonstrators being corralled by about 1000 police officers, drawn from nine different police forces across the Midlands.¹ We had to make our way to the entrance of the ground through what I can only describe as a phalanx of police who created a corridor through the demonstrators to let us get through.

I wasn’t a very big 12 year old and being surrounded by towering police officers on both sides holding back a chanting crowd, in the moment I was both somewhat terrified and perplexed by the experience – Why would anyone want to stop a rugby match from being played? The Springboks were the winners of a very bitty stop start match, 11 – 9, as protesters who had managed to get into the ground ran on the pitch on a number of occasions and staged a brief sit-in at one point holding the match up until the pitch was cleared. From inside the ground it sounded like there was a running battle going on outside between demonstrators and the police. When we came out I remember Welford road had been cleared of protesters leaving placards strewn across the road. The experience of the whole day made a huge lasting impression on me.

Joyce Piliso was a sort of neighbour of ours out at the Mill in Altham. A nurse working for the NHS, she lived half a mile or so away in the next village, Simonstone. A small suburban dormitory village just outside Padiham. Blink and you would miss it as you drive along the A671 on your way to Whalley. Maybe not the first place you would think to hide out if you were on the run from the South African Bureau for State Security, better known simply as BOSS. Especially if you were the only black faces in an altogether otherwise white community. On the other hand maybe a sleepy Lancashire village would be the last place you would think to look if you were a South African secret agent searching for the wife and family of a high ranking member of the African National Congress.

We got to know Joyce over a number of years in the late 1980’s and early ’90’s after we had moved into the Mill. She would come to see us when we had parties and barbecues in the garden and we would do odd jobs for her at her house. And later I think Mike did bits and pieces in her garden and shared veg when we had a glut. As we got to know her better she would tell us about escaping from South Africa and traveling up through Tanzania, then into Egypt and finally coming to the UK. She would mention her husband, Mzwai, and that he was still in Africa fighting for South African freedom, but there was never much detail about quite what his involvement was.

Sometime around late 1994 or early ’95 Joyce asked me if I could build a porch on the side of her house for her. And so one morning while I was up on the porch roof finishing off some slating. A man came out of the house and introduced himself as Joyce’s husband and said “I’ve cooked a full english breakfast for you and would like to talk to you about your co-operative and how your experience might help us in South Africa.”

Mzwai Piliso at the time I met him was an ANC member of the newly elected South African Assembly, but his involvement with the struggle against the apartheid regime went right back to 1959. When he was recruited to the then outlawed African National Congress by Oliver Thambo. At the time he had recently graduated as a pharmacist in Edinburgh and was working in Britain to earn enough money to open his own pharmacy back in South Africa – instead he would become a key international representative of the ANC travelling round the world getting support for the fight against apartheid. He was a  member of the ANC’s Revolutionary Council, set up after the ANC conference at Morogoro in Tanzania in 1969, alongside the likes of Oliver Thambo, Joe Slovo and Thabo Mbeki. He was trained by the military in the Soviet Union and in the 1980’s he was a commander in the armed struggle based in Angola. He did manage occasional visits to his family who by the 1970’s were living in Lancashire.²

So as someone with a mild case of Beikonphobia (Fear of bacon) what do you do when a personal friend of Nelson Mandela invites you to a full english breakfast he has cooked for you because he wants to know how you might be able to help them in the newly free South Africa? – You take a deep breath, you control your stomach and you eat bacon.

Over breakfast Mzwai explained that he was responsible for resettling members of UMkhonto we Sizwe back into South African society as they returned from the front-line states. The problem was, though they were in many cases highly skilled, they had no contacts in South Africa and were often viewed with suspicion when they returned to their home communities. So many of them were struggling to find work and he was thinking that perhaps getting them to form worker co-operatives together might be a way to solve some of these problems.

Shit! – I was really way out of my depth here. Half an hour ago I was sitting on a roof happily nailing slates on – and now I was trying to work out what to say that would sound vaguely sensible to a member of the South African Government who was asking me if I had any ideas that could help returning revolutionary fighters half way across the globe to reintegrate into society. I don’t know now what I said – or whether it made any sense whatsoever. But immediately after we had finished breakfast I shot back to the Mill and took all our books about co-operatives off the communal book shelves and went back and handed them over to Mzwai for him to take back to South Africa – he was leaving later that day. Saying “If these can be of any help please use them.” I didn’t ask anyone else at PIC if it was OK with them if I gave away all our books on co-operative working – no time for consensus decision making.- no one complained when I told them afterwards what i’d done.

I have no idea if the books or what I said were any help to anybody in South Africa and I never heard from Mzwai again – I know he took part in the Truth & Reconciliation Commissions hearings and accepted responsibility for abuses that had been carried out by ANC fighters in Angola while he had been in command there. He lost his place in the Government and suffering from ill health went into semi-retirement and died in 2000 aged 72. Joyce in the end chose not to return to South Africa, but to stay in her adopted home in Lancashire.

Previous Post: Doing Up The Mill (part1) Next post: Knocking-up, Support and other things we were supposed to do