It all started one evening sometime in the early 1980’s when we entertained ourselves at People In Common by playing a word game with our names. I think it was David (Aged 7 or 8) who started it by being amused by writing his name backwards – Aka Divad Niffog. Which got us all going reversing our own name spellings. Resulting in; Arabrab Srednas, Kered Niffog, Anoirtac Pmats, Sirhc Setaoc and Dor Retnuh. None of them sounding remotely like a real name unless we were characters in an Ursula LeGuin story.

We then moved on to trying to make anagrams of our names. Catriona then could become an ‘Atomic Spartan‘, David a ‘Doffing Diva’, Derek might be ‘Fork Feeding’ and I might have had ‘Arctic Shoes’ ¹ and it was at this point that Cathie Cross came into being. Playing about with the anagram idea it appeared that it was only my name that could actually be reconfigured into another realistic sounding name – one that was to become my pseudonym and alter-ego for a couple of years.

Cathie Cross made ‘her’ first public appearance with a spoof letter written to Communes Network in which she purported to be a student doing research into people living in communes. 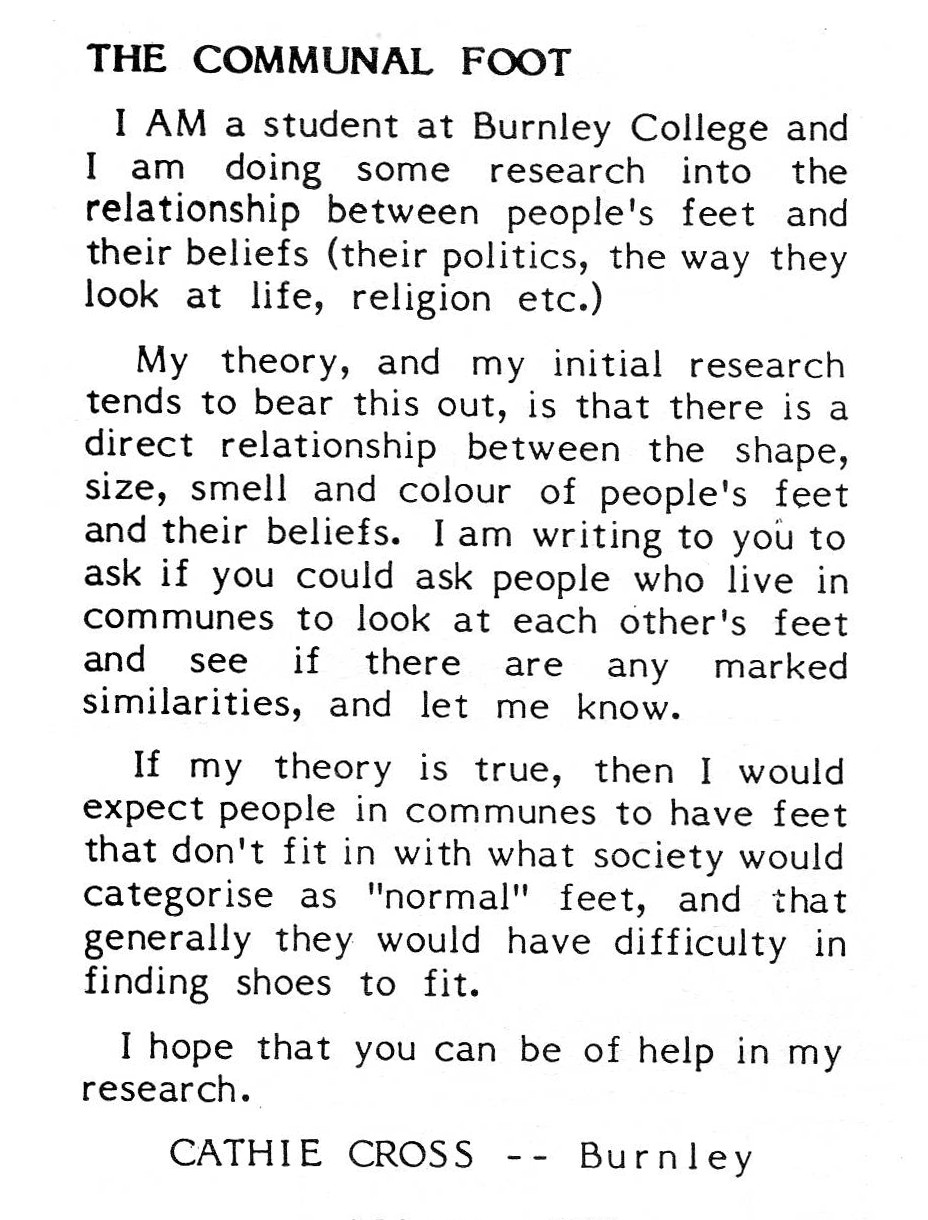 To which the Communes Network editors at Lifespan replied.with the following article and illustration. 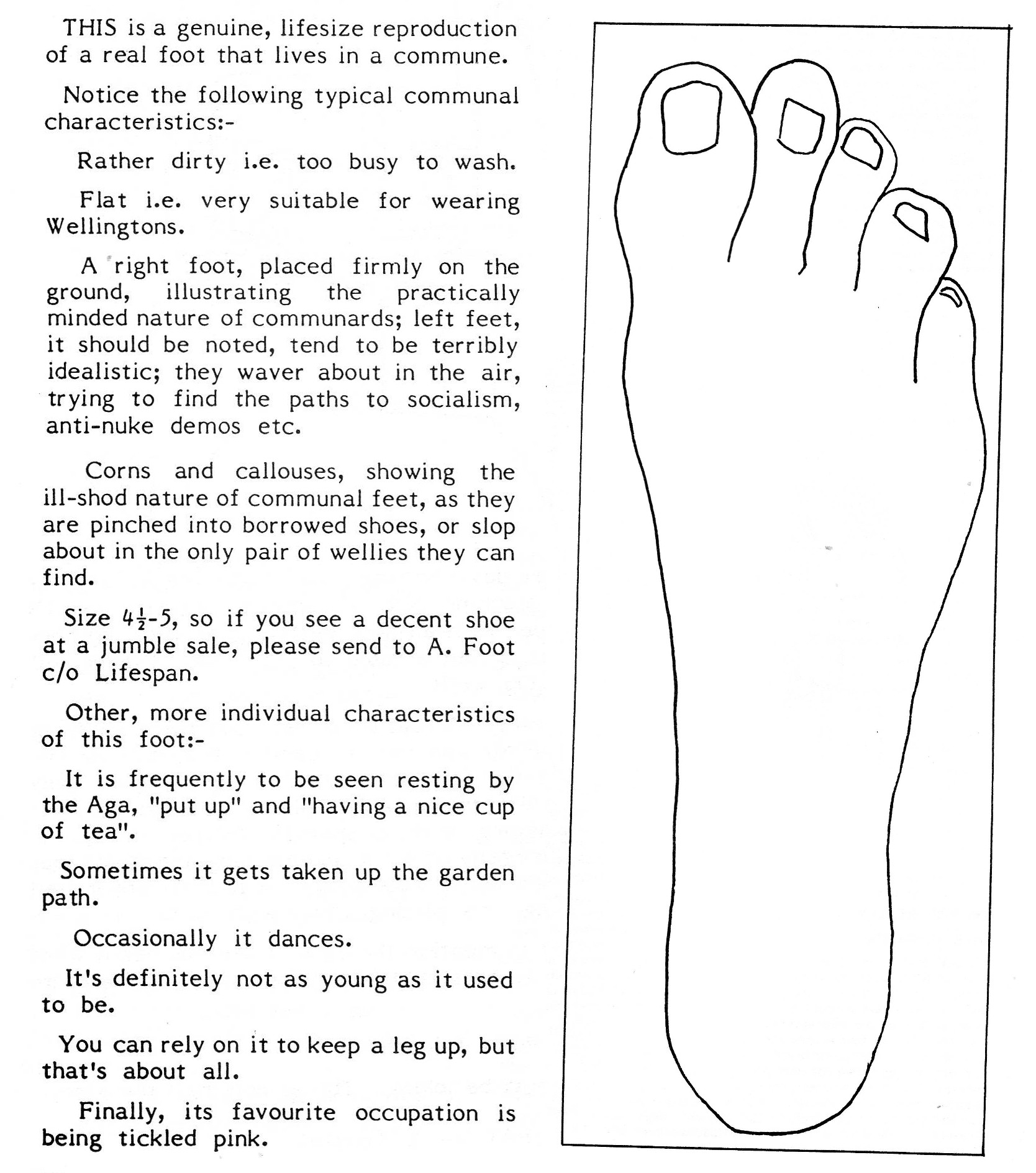 Cathie’s next outing was all together a bit more public. I had written a letter in my own name to the Burnley Express supporting a couple of feminist friends who were campaigning against a local sex shop. My letter elicited a number of responses in support of the shop…. in the meantime however I had become the press officer for the local CND group and it didn’t seem right to be carrying on a letters page argument, albeit about a different topic, while at the same time being the public rep of a local group – so I decided to continue the sex shop newspaper letters page spat as Cathie Cross.

It turned out that the Burnley Express carry out checks on people the first time they write to the paper to make sure that they are ‘real’ people. They initially try to confirm the letter writers existence through public records and if that fails they send someone round to the address given to check that they do exist.  I found all this out when one morning there was a knock on the door of Clarence Street and I was asked if I knew of a Ms Cathie Cross who lived next door?

By this time People In Common had purchased the house next door to our main communal terraced house in Clarence Street and knocked through to extend our communal space. The next door house had an address on a different Street and that was the address I had used for Cathie’s letter to the paper. The caller said they had tried knocking next door, but no one had answered – so by sheer chance I was able to confirm the existence of my own pseudonym. If any other PIC member had answered the door I guess they would have said there wasn’t anyone of that name living there and my alter-ego would have been rumbled there and then.

The Burnley Express went on to print a number of letters from Cathie Cross about a number of issues. I don’t have any copies of the letters unfortunately – I guess there must be an archive of the newspapers in the Burnley Library, or somewhere, which would be interesting to go through and find the actual text of the letters. (And other press cuttings about PIC.) I was pretty secretive about Cathie’s existence and very few people knew about her and my relationship. One PIC member even asked if I knew this woman who must live just round the corner from us who wrote such right on political letters to the paper? 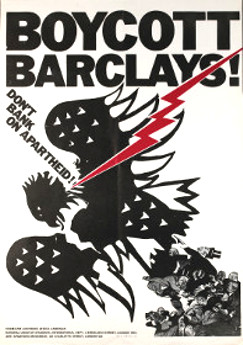 As it was it turned out to be a press call that was a little too close for comfort that would put my alter-ego into retirement. The local CND group had decided to back the anti-apartheid movements campaign against Barclays Bank’s involvement in South Africa and I duly wrote a press release and at the same time wrote a Cathie letter supporting the campaign. The result was that both of us were quoted in a front page headline story in the paper. While I was happy for the campaign to get the front page coverage, the risk of discovery of my alter-ego and the potential consequences for both me and the campaigns seemed now to be too great and, with admittedly a little bit of regret, I concluded it was time for Cathie to end her letter writing career.

Looking back it was a salutary lesson in how easy it is to manipulate the press and I guess you might say it was a foray into the murky world of what is now called ‘fake news’. I have occasionally since been tempted to bring Ms Cross out of her retirement, but have always resisted the temptation as being too risky. I am happy to say that as far as I am concerned Cathie Cross is no more!

Notes: 1. I didn’t really remember the actual anagrams that we came up with – my memory is not that good. The ones here were generated using Inge’s Anagram Generator.

Previous post: What do you do with a thousand trees? Next Post: Doing Up The Mill (part 4) – and the mystery of the Burnley Wood communes