There is a post that appears on Facebook now and then that says “Lets make Orwell fiction again!” back in the actual year 1984 it did feel at times that Orwell’s book had been, if not a prediction, then at least a warning. And while we must have done other things that year at People In Common, the Miners Strike looms large in any memories I have of it. 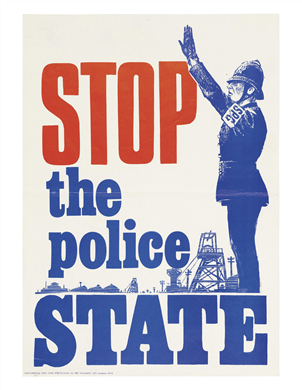 So what did we do in the Strike? There were a number of events that come to mind. We didn’t initially get involved in the Burnley Miners Support group – we were heavily involved in the local CND group at the time and for a while at the start of the strike we put a lot of our energy into keeping it going as many other CND members put their energies into supporting the Miners. As the strike went on though we went on demo’s in the town, collected money and food for the strikers, sang at benefit concerts,joined the odd picket line and put a Stop the Police State poster in the window of our communal house in Clarence St.

At one point we decided we were happy to allow striking miners to fish from our land at the Mill and hunt rabbits for food – I don’t think any of them actually did. But it was a bit of a big deal when we were rather militant about fishing & hunting on our land at the time. We were asked at one point if we could use our builders scaffolding to put up a stage for Arthur Scargill to speak from when he visited the town. This wasn’t a problem (We built the stage, but it rained on the day and the speeches were held inside the Labour club) – But agreeing to do it it led to problems with our phone. After a short while of just thinking there was a fault on the line – there were odd clunks & clicks when you picked the phone up and there were occasionally other voices on the line¹ – in the end we came to the conclusion that our phone was being tapped. A conclusion reached by other people who were also involved in organising the Scargill meeting about their own phones.

We initially laughed it off, but when a phone bill arrived for £296.94, more than three times the size of our usual bill, we decided that it was one thing to be being watched by Big Brother – but being charged for it was another matter entirely. We went to the local press and openly accused BT of illegally tapping our phone line and refused to pay the outrageous bill. There followed a protracted exchange of letters between us and BT. With them denying that there had been anything going on and us demanding an itemised bill to show how we had run up such a large amount. In the end after a stand-off that lasted from June ’84 until early in 1985 they offered to settle the matter, still without admitting any wrong doing, if we would agree to pay £100. This we did, while announcing to the local press that this was tantamount to an admission that they had been tapping our phone after all.

The phone tap incident wasn’t the only time our communal path crossed with the authorities during the strike – though the other time was very different. One Sunday morning in the winter of ’84 there was a tap on the door of our communal house and when I opened it there was a slightly oddly dressed elderly woman standing there who asked me “Do I live here?”. When I replied “No”, clearly distressed, she went to walk off down the street. It was freezing cold and she had no coat so I went out after her and wrapped my coat around her shoulders and tried to help her work out where she did in fact live. A task made harder by her impossibly broad Lancashire accent which I struggled to understand – I couldn’t even work out what her name was. In the end I persuaded her to come back to our house and warm up with a cuppa – while we phoned the police station for some help with our lost little old lady.

Twenty minutes later a burly looking policewoman appeared at our window staring at our Stop the Police State poster before she knocked on the door. After we had explained what had happened the policewoman managed to understand our lost woman enough to work out her name. (It was Miss Jaffa – which is what we had thought she said, but didn’t quite believe that Jaffa was a real surname.) While we waited for the station in town to search for the woman’s address we brewed up for the rather chatty policewoman, who idly browsed through a copy of Peace News that was lying on the table before quietly closing it having decided maybe she didn’t want to know what it said after all. Instead she launched into a conversation about the strike and the effect it was having on the local police. “All the men have been sent down to Nottingham and it’s just us women left in the station. If you want to riot now’s the time to do it. We’ve discussed it among the girls at the station and decided if there is any trouble in the town we’re not going out to deal with it!” 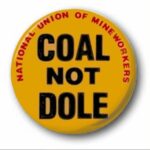 It turned out that Miss Jaffa lived at the opposite end of the next terrace along and me and the policewoman took an arm each and started to escort her back to her home at the top of the hill. Half way up we were faced with a half-dressed man charging down the hill in his slippers who completely ignored me and the policewoman and launched into a rant at Miss Jaffa – “I’ve told you before about going out dressed in my clothes! Where have you been? I’ve been worried sick looking for you……” Somewhat nonplussed at this, me and the policewoman eventually managed to calm the man, who turned out to be Miss Jaffa’s brother, down and get the two of them back to the safety of their own house. As we were about to leave Miss Jaffa thanks us both and handed me back my coat with it’s Coal Not Dole stickers on it. As we walked away the policewoman commented – “Oh I am glad it’s your coat. I was starting to think I’d stumbled across a whole neighbourhood of political radicals!”

Notes: 1. This wasn’t the first time we had had ‘problems’ with our phone. When Woody was living with the group he set up a house to house telephone extension using an obsolete cable TV wire that ran up and down the terraced streets alongside newer TV cables. The result worked Ok except that occasionally we would get TV programs ghosting in the background of our phone calls – friends would say “can’t you turn that TV down?” What we didn’t know was that our telephone conversations were also ghosting on other people in the street’s televisions. Eventually when a Cable TV engineer was standing in the street outside our house staring up at the cables and scratching his head – I think it was Derek who went out and confessed to what we had done. The guy was so relieved that we had saved him days of work figuring it out that he gave us a proverbial slap on the wrists, disconnected our wires and that was it.

Previous Post:Notes on the history of Altham Cornmill Next post: Doing up the Mill (part 1)