Late one night in early 1980 a number of mysterious road direction signs appeared on lampposts in the centre of Burnley. Each sign had the word ‘HARRISBURGH’ followed by a number on it and pointed in a different direction out of town. Over the next week or so perplexed locals rang the police wanting to know where this “Harrisburgh” was and what was happening there and why did the signs all point in different directions?

The signs were part of a Friends of the Earth anti-nuclear campaign, highlighting the nuclear accident at Three Mile Island nuclear power plant, nr the town of Harrisburgh in Pennsylvania USA. I had mocked the signs up and gone round with Phil Bennett and Dave Bond, stalwarts of the local Friends of the Earth group, with a ladder and wired them to the lampposts. The numbers on the signs were the distance in different directions to the nearest nuclear sites to Burnley; Springfields reproccesing plant nr Preston, Heysham Power Station on Morecambe Bay, the power station at Hartlepool and Sellafield (née Windscale).

While perplexing the good folk of Burnley was some sort of success, somewhat undermined by the fact that the answer that any motorist who rang the police got was along the lines of “Sorry we’ve no idea whats going on.” It did get some press coverage when the FOE wrote to the paper telling them about Harrisburgh / Three Mile Island. But the biggest result was that a local group was formed – BANA – Burnley Anti-Nuclear Alliance. When some folk from neighbouring Nelson came along to the first meeting, held on the first anniversary of the accident,the name quickly morphed into the Burnley And Nelson Anti- Nuclear Alliance.

At the end of the 1970’s and into the early 80’s there was a very active anti-nuclear power movement in Britain, of which B.A.N.A.N.A became a significant regional part, Helping to organise demonstrations, arranging coaches and once chartering an entire train to take people to a demo. Me and Barbara would cycle to the group’s monthly meetings at the pub next to the old cinema in Brierfeild and the People In Common gestetner duplicator was regularly pressed into action producing leaflets and flyers for various events and protests. I hadn’t really been involved in an organised protest group before – with treasurers and secretaries etc and I found some of the discussions at times tedious – trying to get agreement on courses of action from a wide cross section of people was a struggle.

” I enjoyed it at the beginning when it was anarchic and had very high energy. Then people got set in their ways and a lot of politicos joined – alternative bureaucrats. But at first we had a reputation as a group who did things…”

Occasionally we would undertake our own adhoc direct actions outside the group – bypassing any need to get everyone’s agreement. One time I produced a mock British Nuclear Fuels warning notice to go on railway bridges along the route that trains carrying nuclear waste came. (They often used the line through Burnleywood at night on the way across country heading for Windscale/Sellafield.). It was deliberately low key just saying something along the lines of ” Trains carrying radioactive waste occasionally use this line. If you witness an accident; DO NOT approach . Ring the emergency services immediately and notify BNFL on this number…..” I flyposted the notices on the side of railway bridges across Burnley one evening just before me, Kate & Finn headed off for a weeks cycling holiday on the Isle of Mann. While we were away a local Labour councilor came across one of the notices and caused a stir in the Burnley Express demanding to know what was going on – BNFL neatly added to the confusion by refusing to confirm or deny whether the notices were theirs. The paper finally concluded that it must be a hoax because there was a spelling mistake on the notice and “BNFL would surely have checked the spelling before putting notices up.” When I got back I had ‘plausible deniability’ to the accusation ‘Was this some of your doing?’

Later that year me & Barbara went off on a protest-cycle-ride-cum-holiday, flyposting as we went. Following the rail lines towards Sellafield calling in and staying with friends and other anti-nuclear protestors on the way. Finally arriving early one morning on the Cumbria Cycle Way that runs alongside the Sellafield perimeter fence – where armed security guards shadowed us from inside the fence as we rode by. Having just dropped down from the western lake district the day before this was the most dystopian landscape you could imagine.Here were fields of potatoes growing right up to the fence behind which was the site of the worst nuclear accident in the UK. In October 1957 a fire at the site burned for three days and released radioactive contamination across the UK and the rest of Europe. Ranked in severity at level 5 out of a possible 7 on the International Nuclear Event Scale. Needless to say we didn’t hang around for long.

At the end of April 1986 rumours started to circulate that there had been some sort of huge nuclear accident in the Soviet Union. Radiation monitoring stations in Sweden had started to pick up unusually high levels of radiation. The Soviets initially denied that there had been any accident, but the anti-nuclear movement started to fear the worst. When the news got through to us I remember going out and buying stocks of Iodine tablets from the local whole food shop and getting Finn and the other kids to eat them (Not easy – the pills tasted of dried seaweed and grass!) They were supposed to block the uptake of radioactive isotopes into their thyroids.

Whether we were overreacting I don’t know – the Chernobyl disaster spread radiation across the UK with the contamination being scattered irregularly depending on local weather conditions. So it was hit and miss whether you were likely to be affected. Chernobyl was the result of combination of a flawed reactor design that was operated by inadequately trained personnel. Which allowed the nuclear industry in other countries to claim “It wouldn’t / couldn’t happen here!” But things changed after Chernobyl. The industry was on a back foot from then. PIC member John Bradbrook¹, the only member we had who was involved with the Labour Party at the time, came back from the Labour Party conference the following year and reported that the tables had turned – this time the anti-nuclear protester had been invited inside while the nuclear industry was lobbying from outside the conference.

One of the hardest arguments to make any headway on when discussing the nuclear industry, civil or military, was the jobs one. Unions were in general pro-nuclear simply it seemed then on the grounds of protecting members jobs. Many of those jobs were in engineering. Our attempts in the leaflet we produced on the issue now look somewhat naive and simplistic -I doubt ,that ‘Don’t Radiate, Insulate! ” or a call for alternative production cut much ice with engineers at the time – except perhaps in Burnley.

The Lucas Aerospace factory in Burnley was one of the centres of activity for the Lucas Combine Shop Stewards Committee who facing the threat of redundancies in 1976 had drawn up an Alternative Corporate Plan. The plan outlined alternative products that the skilled workforce could transfer to making rather than face job cuts. These alternative products included; kidney dialysis machines, heat pumps, Hybrid petrol/electric vehicles and a road/rail bus.

In 1978 Burnley held it’s first May Day festival ² in Townley Park set up by the local Trades Council with support from the local high street Co-op and organised by the indefatigable co-op member relations officer Liz Chadwick. We had a People In Common stall along with other local political groups, local Trade Unions craft stalls etc and obligatory fun fair rides. I don’t think it was at the first festival, maybe the second or third one, that . the Shop Stewards Combine brought their prototype Road Rail Bus to the festival. The story was that the components for the bus – or the bits that converted it to run on railway lines – were made ‘secretly’ under the noses of the Lucas management in company time and smuggled out of the factory to be assembled to produce the prototype bus.

If The Plan had been implemented it would have completely challenged the given order of how industry worked – it was bottom up rather than top down – it argued for shop floor involvement in the running of the company and it was this that Lucas management couldn’t cope with, or weren’t prepared to countenance, rather than the proposed products not being viable. The very existence of a detailed plan to convert a major multi-national company from making parts for the aerospace industry and the military over to socially useful production gave the anti-nuclear arguments of the likes of Friends of the Earth and CND a real boost. The plan was the subject of a number of documentaries and publications at the time. But as the 1980’s decline in UK manufacturing started to seriously bite into the engineering sector The Plan faded from prominence and was forgotten for a while. But with the current urgency of the climate crisis The Plan has resurfaced as an example of how we might go about switching industry to socially useful production. A new documentary titled THE PLAN – that came from the bottom up’ came out in 2018.

We played a number of benefits for BANANA & Burnley CND as the ‘Banana Band’ one of our favourite numbers was Stay Home in Bed By – Leon Rosselson & Nigel Gray – see Singing for Our Lives for more on singing at PIC. 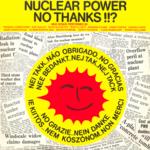