We are a gentle angry people
and we are singing, singing for our lives……..
Holly Near

“Can you sing?” Gordon Divers the school music teacher, asked me. “No.Not really.” I said – “Would you like to give it a try in the choir? – We are short of male voices and I’ve heard you joining in on the rugby team bus!”

I went to an experimental comprehensive school in 1971 as a 14 year old. I had played rugby for Leicestershire U14 County Colts at my previous school and saw myself as a bit of sporty type – certainly not an artistic creative type. But the school had a different idea – lots of them actually. The PE department was part of a wider rather unusual grouping of subjects that included:sports, music, drama and dance all under the same head of department and housed in the same part of the school. So for four years rugby players rubbed shoulders with dancers, members of the school orchestra & choir and budding youth theatre actors – a potent mix as it turned out.

And so it was a couple of months after being asked the above question I found myself much to my surprise singing a tenor part in the school choir in a performance of Faure’s Requiem in the local village chapel. I would slowly spend more lunch times in the school theatre than on the rugby pitch, hanging out with dancers and musicians (They were all cooler and better looking than rugby players!). I would eventually end up playing lead in a school Easter mashup of Jesus Christ Superstar / Godspell and play Action in a version of West Side Story.

But on leaving school I would still have said “Sing me? No not really.”

When I worked for the theatre group touring prisons we used to take musicians inside with us to play a spot. One time we took Frankie Armstrong into Holloway and when she sang the prisoners who weren’t in the hall thought a riot had started! (If you know Frankie’s singing you will understand why.) The most regular musician to come in with us was blues guitarist Simon Prager.

Simon did persuade us at one point to form a scratch skiffle band to acompany him – with me on tea-chest bass, Jan playing an actual washboard, we joined in the choruses on the likes of Rock Island Line and Putting on the Style. Simon was our intro to the London world of blues and folk music. He used to visit us in the squat in Hampstead Lane and we used to go to gigs he played with Steve Rye and Bob Hall. Jan eventually had a relationship with him and sang ocasionally with him as a blues duo.

In a couple of years we saw all sorts of people that I now look back and wonder if I really appreciated at the time who I was seeing/hearing. We went back stage to meet Sonny Terry & Brownie McGee – who Simon knew. Saw the 101ers play on the back of a lorry at a squatters demo and heard Kilburn & the High Roads from the back of a crowded pub – on Kilburn High Road! I went to the Chartlon Football ground festival put on by The WHO and saw Lou Reed, Maggie Bell, Alex Harvey…. Lol Coxhill was the resident in the bar at the Oval House when I worked for the video project there. One night we went to ‘The Singers Club’ run by Ewan McColl & Peggy Seeger. – and perhap most memorable of all we would troop down to The Bishop Bonner pub in Bethnal Green every so often on a Thursday night to catch Chas & Dave. (Plus Chas’s mum.)

At PIC when I arrived the only music that was going on was that Barbara was learning to play Scott Joplin’s The Entertainer on an old upright piano she had jammed into her to tiny downstairs front room bedroom, leaving just enough room to sqeeze by it to get to the double bed. She was also teaching herself to play the guitar. 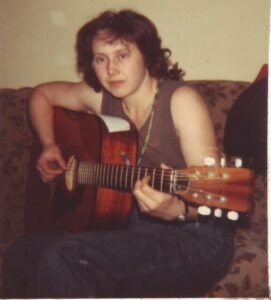 When Kate arrived from Laurieston she had a bit of a folkie background.  In Hull she had frequented the University Folk Club where Mike Waterson occasionally sang and she had also sung at the Nottingham Traditional Music Club.

In March 1982 Barbara, Kate and Eva, a long stay visitor, got together a short set of songs to sing together at a benefit concert for the local anti-nuclear group. Kate says that they were put on last after people had started to leave. ” ’cause they must have thought that three women weren’t going to be that good – but we were singing tight harmony and singing really political songs. The organisers apologised to us after we had finished..” 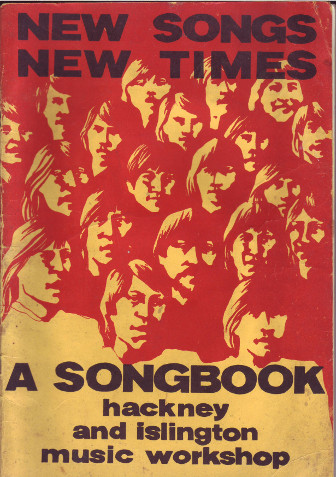 I joined in singing with Barbara and Kate after Eva left and we started to sing together regularly. Tess, Derek and Ray also joined us from time to time and Derek often offered creche/babysitting support so we could go out and perform. Over the next few years we sang at CND, Anti-Racist, Miners support group and Labour Party Benefits,in local folk clubs, on marches, busking in the town centre, at parties, at home events and at one paid gig at Haslingden folk club. 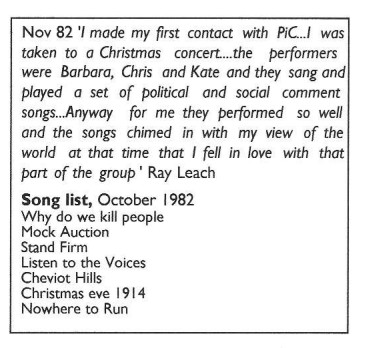 Our choice of songs grew out of anti-nuclear and feminist politics. Inspired by the singing and songwriting of Roy Bailey, Frankie Armstrong, Leon Rosselson, Judy Small, Holly Near, Swan Arcade, the Watersons and Si Kahn. Our politics overlapped with those in the local punk scene and we occasionally did spots at local punk/post punk gigs. We appear on a locally produced tape, titled Mangrove Mazes and Beeorbtractors which features local East Lancs bands and singers.

May we live to see the day when walls of words and fear
No longer stand between the truth and dreams
When walls of windows rise into the darkness and we dare
To look into the mirror and see peace
Do you think of me as enemy or could you call me friend
Or will we let our differences destroy us in the end
The wall that stands between us can be a window too
When I look in the mirror I see you.
Judy Small / Pat Humphries

Songs & Singers who Inspired us:.

Notes: Barbara now sings with the East Lancs Clarion Choir, Kate sings at folk Clubs in and around Lancaster and at 62 I decided it was time to learn to play a music instrument and now have 2 ukuleles and a Banjolele.


Previous post: “No Toilet and what if I got pregnant?” Next Post: So how did we decide that