So how do you turn a derelict mill into a thriving community with a handful of semi-skilled enthusiasts, no money, whilst bringing up small children (some of them being home schooled.) and at the same time being involved in local political campaigning ? – The answer is slowly. 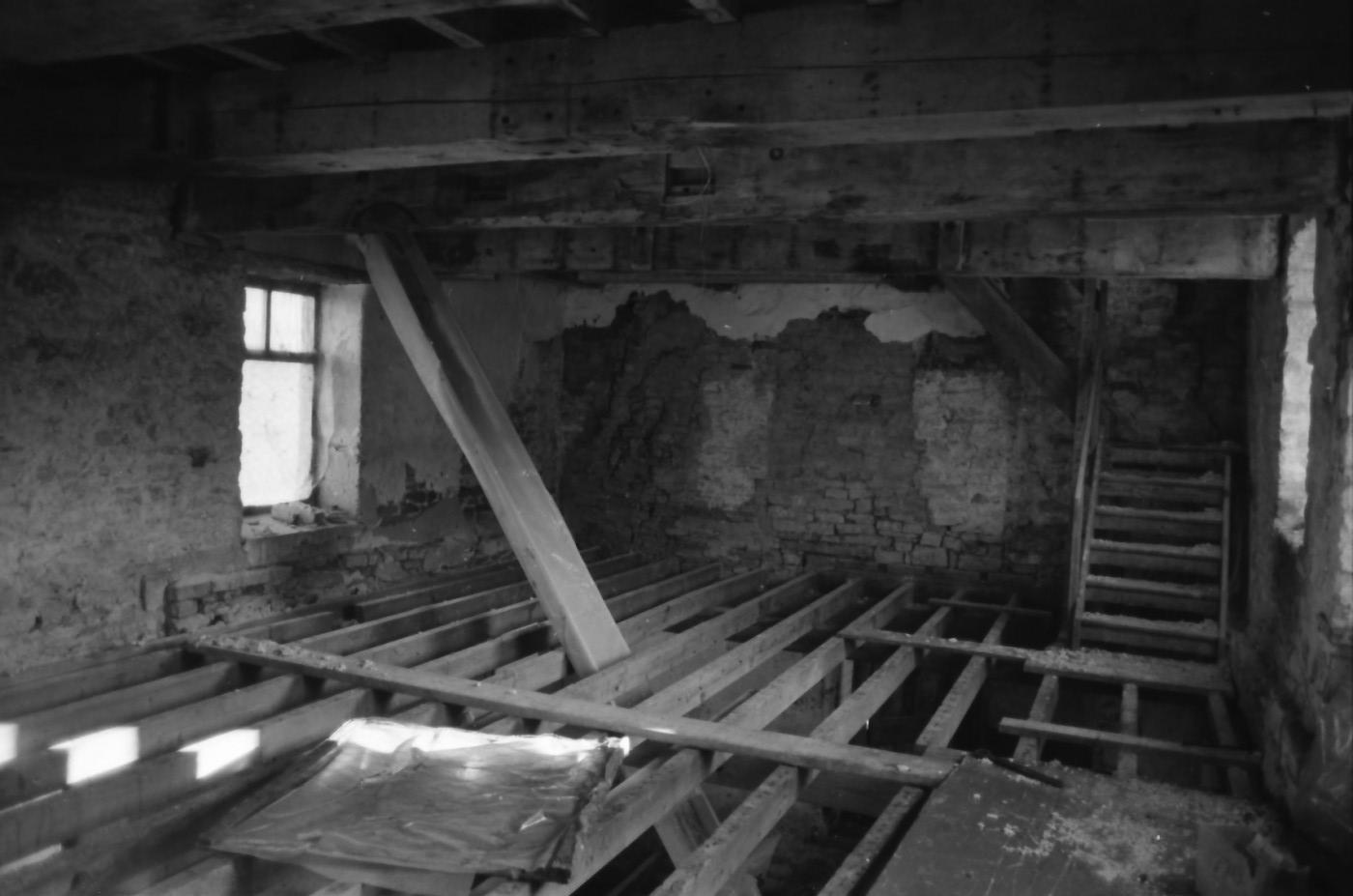 Almost from the beginning there were gibes about “mill stone round our necks” and predictions by the likes of Woody that it would take ten years before the place would be fit to move in – all of which was a bit of a downer when you were trying to work how you were going to renovate this…. OK, seriously dilapidated grade 11 listed building with wet-rot, rampant woodworm infestation, a collapsing roof, no running water, no drains and hardly any intact windows…  When you were trying to turn this amazing opportunity into your dream communal home.

But realistically what did we think we were doing? Were we blinded by idealism? Looking back it seems like a kind of madness to have taken on a project of that scale without, at the time it was bought, anyone having any real construction skills to speak of and nearly not even enough money to buy the building in the first place. OK I admit it was picturesque – if you screened out the pylons and the factories from your view. But mostly it was a dream that we had that inspired us and kept us going through the years.¹

After we had done what we could to make the place safe and stop it falling down (See previous post Mill owners out on a stroll)  and had got over our fit of enthusiasm at being owners of 3½ acres of field and riverbank. We set about trying to work out what it was we wanted to do with the place. It’s clear now that we couldn’t really grasp the scale of the building – while it was big, it wasn’t as big as you thought it was. So some of the fantasies that we dreamt up were never going to fit into the building. As well as accommodation for a communal group we talked about small scale production workshops making things – often ideas for inventions that Derek had; an elliptical chain wheel for bikes and a better wheelbarrow. At one point we seriously considered turning part of it into a youth hostel with a campsite out on the field.

Meanwhile we were spending time back in Burnley renovating the houses that we lived in. The group had bought a number of houses in the Burnleywood area – mostly for a few hundred pounds each. They were live-able, but with outside loos and no bathrooms.The only house that came with a bathroom was May Street which was bought with a loan from a members parent. After Clarence Street was renovated as part of a Job Creation Scheme that the group ran, a couple of houses one on Branch Road and another on Sussex Street were renovated using the groups own resources. After that we started to get home improvement grants from the council to pay for most of the work and started to do jobs for other people as Altham Workers Cooperative ,a name chosen with the move to the Mill in mind.

In 1979 we decided that we needed to be able to have some sort of base out at the Mill and started work on renovating the boiler house. Using the old caravan that Welfare State Theatre company had given us when they left Burnley as a site office-cum-bunkhouse. 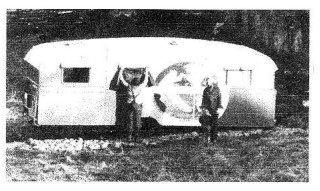 The first job to do was to take out the huge boiler that took up a third of the room. A friend, Simon Wilson, came with oxy acetylene cutting gear and painstakingly chopped it into pieces that we could carry. We sold the scrap and used the money to help with the renovation. We rigged up a couple of temporary water supplies; a tower outside to catch rainwater off the roof and a couple of large tanks in the old coal chute, which we filled with a hose from Tom & Dorothy Shepherd,the neighbours across the track. In the end we had a serviceable communal kitchen / living room with a sleeping platform and an old oil drum converted into a woodstove, in which we would burn our way through the half rotten timbers as we removed them from the rest of the building.

As we had managed to fairly easily get grants from the council in Burnley to renovate our terraced houses we thought we stood a good chance of getting help to do up the Mill. We decided that the best way to maximise any potential grant income would be to put in a planning application to turn it into six separate flats, even if we imagined that we would actually live there as one big communal household.

After many discussions on what we wanted in the building. Things like: How to best heat the place?, Could we somehow tap into water power from the river?,What was the most eco-friendly insulation material to use? and how best to arrange the room layouts? The last discussion revolving round the whether in a communal building you go for small personal spaces and maximum communal areas, or because you are spending a lot of time together you need to have decent sized private spaces? After we had mulled all these questions over on multiple occasions Derek drew up a set of plans and we applied for planning permission for change of use and to turn it into six flats.. 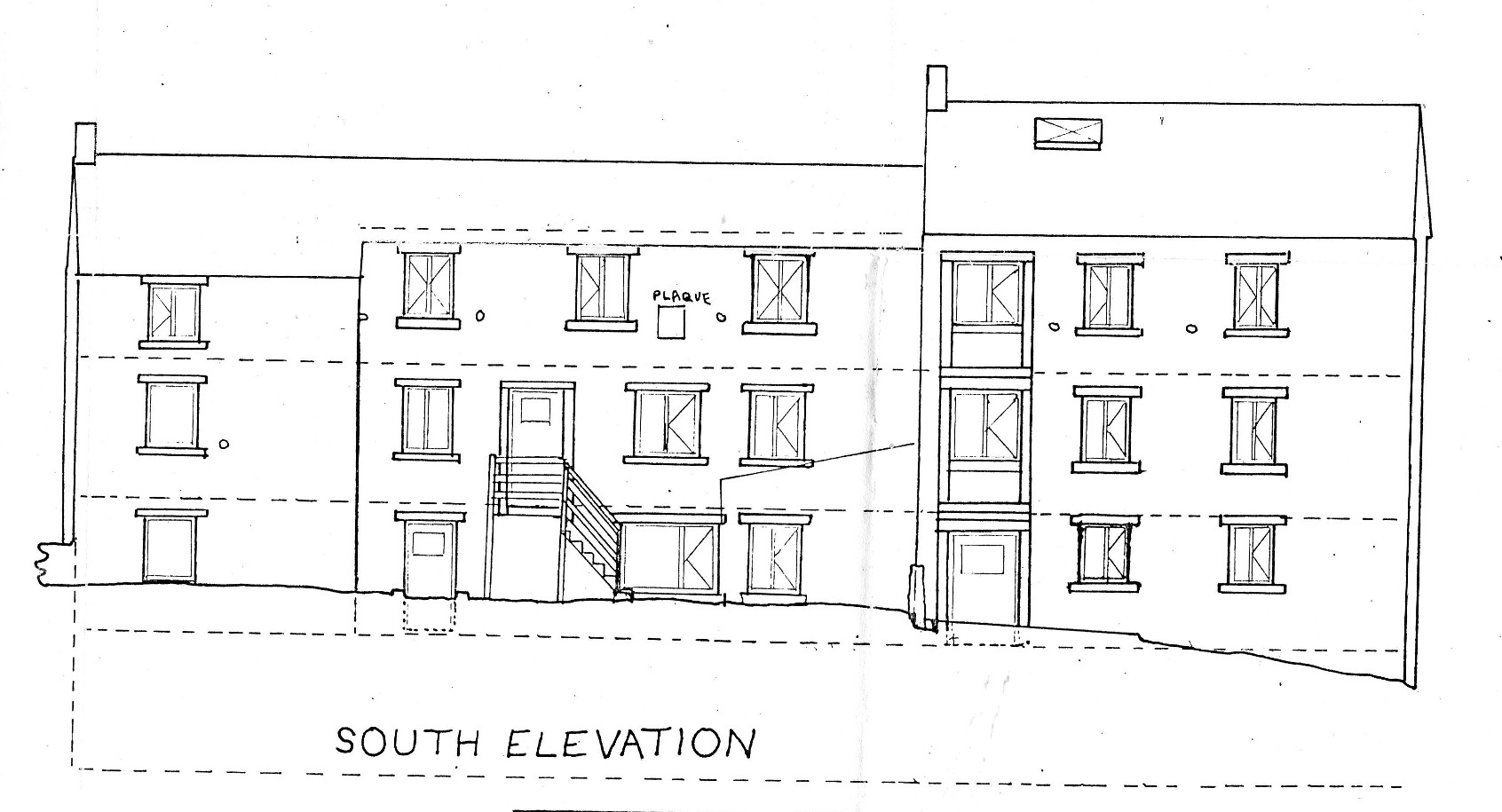 While we were waiting for the planning permission to come through we explored whether we could get any funding from Heritage sources. If the Mill wasn’t on the historic buildings at risk register, it should have been. A young woman came from English Heritage (or whatever it was called back then.) to assess the building. It seemed pretty clear to us from the report she wrote that she had been sent to find reasons to refuse to give us any money. The best bit in the report was when it said in effect that collapsing roofs appeared to be a local architectural feature!

Planning permission came through without too many strings attached and we proceeded to apply to Hyndburn Council² for six Home Improvement grants. But while grants had been freely available for renovating our houses back in Burnley the Mill was an industrial building and grants were only discretionary. On top of that the government was putting pressure on local councils to cut back on spending. The result was that our grant application was refused. We were now going to have to completely reassess how we were going to manage to carry on.

The only grant we ever got for the Mill was a single £60 loft insulation grant – despite the fact that there were six flats the council argued there was only one roof! .We nearly sent the money back with a rude letter complaining how the hell did they think we were going to do up the building with no other support? But £60 is £60 so we kept it.

“As always, architects, if we have them, should be lefthanded (right-brained), visually orientated, socialistically-minded poets, of no self-importance and with a light and brilliant sense of the funny………. a love of the not too perfect and not too finished and an acceptance of the built in messiness of life……”