I’ve been trying to recall my first visit to People In Common which, from what scant records I have of that time, must have been sometime during the winter of 1977/78. I rode my CZ Motorbike up to Burnley through the Peak District following the A6 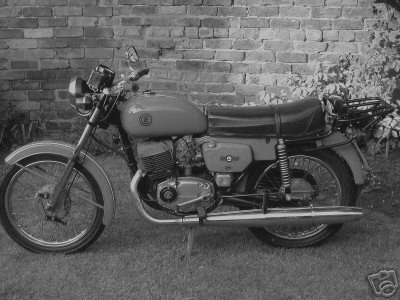 up to Stockport and then skirting  the edge of Manchester via archetypal northern towns. It felt like I was passing through a run-down-slum-dog version of a classic Hovis cloth cap & clogs TV ad; Ashton-Under-Lyne, Oldham, Rochdale and then on over the moors to places with names I had never heard of; Whitworth, Bacup. Finally dropping down into the Calder valley¹ and into Burnley. Something in the setting of old industrial town set against spectacular moorland scenery caught my imagination from my very first journeys to and from Leicester to Lancashire over those winter months.

What I never imagined was the virtual timewarp that this part of, what was then known as, North East Lancashire² was seemingly stuck in. It was like traveling back in time10-20 years to a run down version of the post war 1950’s: cobbled streets, cornershops, Victorian School buildings, Stark-Mechanical-Mills, rows of half derelict terraced houses (Euphemistically referred to as ‘Pennine Cottages’ in estate agents windows.) Weavers and Miners Institutes, old men with rickets…. I am doing the place a disservice, as I would later find out , but on first impressions I had ridden straight into a living Lowry landscape.

I pulled up outside the group’s main communal house on Clarence Street in Burnleywood. The house, originally bought for £100 and recently renovated as part of a Job Creation Project run by the group, was a tidy white stone painted end of terrace house with a newly built kitchen extension – with a wartime air raid shelter still taking up most of the back yard! Through the front door to the right there was a communal living/dining room with a large hatch through to the kitchen. On the left was a utility room that had been a shop in a previous life. Upstairs was a newly fitted bathroom and a couple of bedrooms.

I get a little hazy about what rooms in Clarence St were used for what/when. At some point one of the bedrooms was turned into an office and the old shop room downstairs was also variously used as a washroom, creche, dining room and office at different times. The decor in the main communal room was an odd combination of uniformly grey walls with a splash of orange at one end. I later learnt that the painting of most of the walls the colour of plaster was the result of the group failing to come to consensus on what the colour scheme should be. Which ended with the frustrated decorator buying a bargain job lot of Goosewing Grey paint, a decision that would continue to haunt the group for years to come. My first insight into the limitations of consensus decision making.

I have no idea now who greeted me with the inevitable cuppa when I arrived, or who showed me around the collection of seven terraced houses that the group had now bought, all just around the corner from each other and in varying states of disrepair or renovation. I have a vague memory of being shown to a small bedroom in a house on May Street with a couple of bunk beds to stay in – but I also have a memory of sleeping on a mattress upstairs in a house slightly up the hill on Branch Road – the mattress being the only piece of furniture in the house that was halfway through being decorated – and I also slept for a while on a bed-cum-settee in the living room / kitchen in the house the group owned on Waterloo Road. These must be memories from my first two or three visits over that winter.  There was also no furniture in the main communal living room in the Clarence St house just a collection of mattresses on the floor around the edge of the  room. I don’t think I really realised at the time how poor the group actually was. Having been squatting in London none of this seemed very different, we never had much furniture in any of the squats anyway – most of it lifted from skips. And all the time the threat of eviction hanging over your head. Whereas this was like owning your own squat.

One of the difficulties when you are visiting a community for the first time is that, while you may want to get to know the members who live there, you can end up spending a lot of time talking to other visitors. I spent a couple of hours one evening on my first visit to PIC telling my life story (Albeit a relatively short one at aged 21.) to a guy called Brian, who regaled me with his stories of being a card carrying member of the SPGB, an obscure far left splinter group that I hadn’t come across in London. I thought Brian was a member of PIC only to find out later that he was in fact the estranged partner of one of the members who was there visiting his children.

I don’t really have much memory of what I actually did during those early visits. I must have been taken out to see ‘The Mill’ at some point. (More of that in a later post.) I will have joined in with whatever cooking, cleaning etc was going on, played with the kids, did a bit of exploring around Burnley, went down to one of the local pubs in the evening…  On one visit in order to finish renovation of one of the houses I was introduced to the pleasures of mixing plaster. While  Laura and Pete, who were on TOPS training courses at the time learning plastering and carpentry skills, plastered the ceiling. I felt welcomed in to the group and always came away with a really good feeling about the place as I wended my way back to Leicester after a visit.

One evening about a week after my first visit to People in Common in Burnley I was back at my parents house in Leicester when there was a knock on the door and a middle-aged couple were standing there – they introduced themselves as Woody Wood & Barbara Hand – they had come hotfoot from a visit to PIC in Burnley and I guess they were looking to recruit me for their version of People In Common that they were trying to get going in Leicester – called Some People In Leicester. After a somewhat awkward conversation while my parents were in the other room, I think I said I would come and visit them – more in order to get them to go than any real intention. This was my first encounter with Woody and we would meet on and off over the next couple of years at PIC and for a short while one summer when I stayed in a house they had the other side of Leicester.

I never quite got a handle on Woody back then – on the one hand he was a very down-to-earth practical man – He had previously work as an sort of super electrician wiring up power stations – at least that was the story I was told.- and he had become disillusioned with conventional left politics. He had also written a whole philosophical political theory piece about the alternative society that I think was published in an edition of Undercurrents.  It was all about a ‘Third way’ not capitalism and not socialism, but a different radical way. (This was long before Blair coined the same phrase to sell his version of Thatcherism-lite to the country.)  After formulating his theory Woody looked around for some signs of where it might be happening or might take root.

Taking a look at communes he came to the conclusion that of all the intentional Communities he knew about People In Common were ‘the best of a bad bunch’ and he spent some time working with them on a Job Creation Program renovating one of their terraced houses. Before returning to Leicester to attempt to set up his own version of a ‘living/working co-operative’. I don’t think folk at PIC ever really subscribed to Woody’s grand ‘Third Way’ theory. Or to anybody’s grand theories for that matter. Woody got Some People In Leicester going. It has had it’s ups and downs, but managed to survive and morphed into Corani Housing Co-operative and is still going today.

Previous post: This little piggy stayed at home Next post: We fought the law and the law changed