Back in 1974 it was not possible for more that three individuals to own a property together without setting up some sort of corporate organisation; a limited company, Trust or a Housing Association. All of which had embedded in their seemingly impenetrably bureaucratic rules some sort of hierarchical management structure. To a bunch of radical hippies and ex-squatters this appeared to be a load of legal tosh – and the group decided to fight the law on the matter. I say People In Common ‘fought the law’! What I mean is that the group took on the might of the Registrar of Friendly Societies in a trial of wills by correspondence course.

It is always useful when taking on the weight of the legal establishment to have a solicitor on your side. PIC memberTrevor Howell was a solicitor who had been working for the squatting movement in London and was keen to try and establish some form of radical co-operative housing structure that would be more secure than squatting and that people with little or no resources would be able to afford to join. He had been involved in organising the high profile squat of the Centre Point tower block in central London in January 1974.

……. In January 1974, a group of activists pulled off a spectacular publicity coup occupying Centre Point, the best-known empty building in Britain. Their action required months of planning, including the infiltration of the firm supplying security guards and was performed with almost military precision. It made the frontpage of every newspaper in the country. Centre Point, empty since its completion in 1963, was a gross affront to the homeless and a powerful example of the way companies could make vast profits simply by owning empty office blocks… As well as publicity,the occupiers received a great deal of support and, when they left the building after two days,they were greeted by a rally of 3,000 people.

The success of this ‘propaganda squat’inspired others take thier own direct action. In May Hillman House in Coventry was occupied by 60 people. In the same month in Bristol (where the amount of empty office space had  quadrupled in less than a year) a coalition of radicals took over an empty office block and moved in several homeless families. 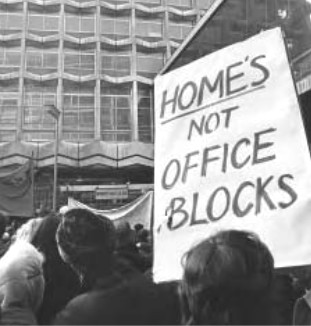 They manage to stay for a month and shortly after Bristol Council put a moratorium on planning applications for new office buildings. There was much argument within the squatting movement at the time as to whether these high profile ‘propaganda’ squats were what activists should really be putting their effort in to. Rather than actually finding practical solutions to the housing crisis.

I like to think that Trevor Howell was trying to work out a way to provide one such practical solution, perhaps inspired by the ‘propaganda squats. But I don’t know.as I never met him. He died in 1976, before I joined PIC,.in a tragic motorcycle accident on his way back from volunteering at the community law centre in Manchester. The circumstances of the accident, as related to me, were something of a mystery – no other vehicle was involved, on a straight stretch of road, in reasonably good weather conditions. Trevor appeared to have fallen off his bike and banged his head and died instantly.

In his corresondence arm wrestle with the Registrar of Friendly Societies Trevor took the rules of a Housing Association and stripped them down to what he considered to be the absolute legal minimum required and sent them off to the registrar. There followed a protracted exchanged of letters where the registrar would return the ‘new model rules’ saying that he couldn’t possible accept them as they didn’t cover this or that legal point. Trevor would add in as brief a  clause as he could imagine would answer the points and return the rules for another shot at registration.

Eventually persistence paid off and a version of what became know as the People In Common Fully Mutual Housing Co-operative Model rules were finally accepted by the Registrar. Setting a legal precedent that a small group of people could legally own property on an equal, co-operative and democratic basis with the minimum of legal regulation.

In 1975 Trevor Howell was involved in a Legal Frameworks conference, held at Laurieston Hall in south west Scotland, where a number of possible ideas for helping new intentional communities to get off the ground were discussed.These included not only the new PICHC rules, but also both the idea of setting up an alternative building society that would lend to co-ops and communes – something that conventional building societies at the time wouldn’t consider.¹ And perhaps more practically the idea was floated of setting up a ‘Maxi-Co-op’, a co-op of co-ops that would have serious economic clout by being able to pool the not inconsiderable property assets owned by individual communities and borrow money secured on those assets to set up new groups.² After the conference the results of these discussions were printed in  a Legal Frameworks booklet.

Trevor Howell never lived to see the impact that his work on co-operative model rules would have and few people today are aware of the pioneering co-operative work that was carried out by him and others in the mid-seventies in the back streets of Burnley. People In Common made their model rules available to anyone who wanted them for the price of postage – with permission for them to be freely used and adapted to suit whoever wanted to use them – A very early example of an ‘open-source’ legal document with creative commons copyright.

Many UK intentional communities set up from 1974 onwards used the PICHC model rules, or a variation of them – and some who had set up in the early seventies converted to use them.They were later used by the National Federation of Housing Co-operatives as the basis for thier own model rules. They were also rewritten for worker co-operatives by Malcolm Lynch the solicitor working for ICOM – the Industrial Commonownership Movement. They were reprinted in the back of the 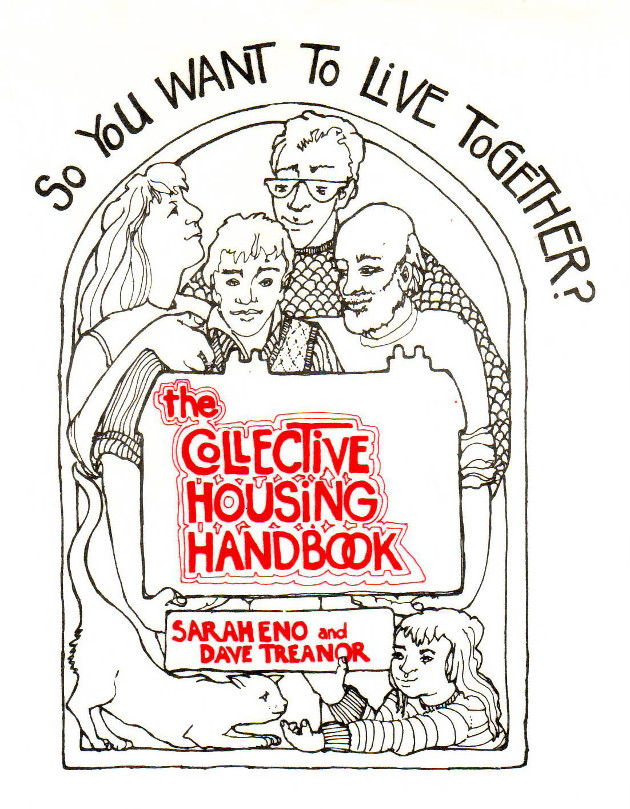 Collective Housing Handbook produced by Sarah Eno & Dave Treanor at Laurieston Hall in 1982. And in the 1990’s they were again used by the Radical Routes Network & Catalyst Co-operative as the legal basis for a whole new generation of radical co-operatives.

It was explained to me that Trevor’s view was that the primary reason for needing a legal structure was to protect yourself from the arbitrariness of the State. And secondly to provide you with a framework to help sort things out should conflict arise within the group. Other than that groups ought to be able to decide for themselves how they wanted to govern themselves. This legal rule of thumb idea has served me well on my journey through communal living. It has given me simultaneously both a heathly disrespect for the law and an appreciation that you do need to take it seriously.