I first remember discussing communal living with friends at school in the early summer of 1975. It was one of those lazy A-Level afternoons after what minimal lessons we had to attend were over and we were round someone’s house (probably with a bottle of wine.) and conversation drifted to speculation on each of our future plans.

I think there was a realisation that as a group of friends this was going to be the parting of the ways once the school term was over. I don’t recall who said – “wouldn’t it be nice if we could all get a big house and share it” – but we all agreed that it would. In reality we had no idea how to go about it, what it would entail, nor as far as I know did any of us know of any communal household at the time.

Looking back what surprises me is not that a group of school leavers should dream of communal living – were we really suggesting setting up a commune or were we thinking shared student house? – I don’t know – it was just a collective fantasy. What really surprises me now is that I don’t think any of us thought this was an odd or strange idea. Somehow in the mid 1970’s communal living seemed like a real option for school leavers.

We all went our separate ways after school – I ended up in London looking for something to do after a summer school at the National Youth Theatre, others went to University, work, whatever and I have mostly lost touch with them (Though on my travels I have bumped into two other pupils from the same school, different years, who had joined communes.) After the Youth Theatre I got a part-time ‘job’ – we were only really paid expenses – working for Stirabout, a theatre company that toured prisons.

I had been living over the summer in the basement of friends of friends on the banks of the Thames at Kew in exchange for doing some cleaning, but the cost of travelling to Kings Cross for rehearsals was rapidly depleting the little money I had saved from a job earlier in the summer working in a plastics moulding factory.

Jan who also worked for Stirabout was living with an old school friend of hers, Mick, in a ‘licenced squat’ next to Camden overground station. The house was owned by the council and was waiting to be renovated – which it desperately needed, largely because the whole building shook every time a train pulled into the station – in the meantime it was licensed along with other properties in the same situation to Student Community Housing (SCH) which let them on peppercorn rents. This was the semi-official short-life end of the squatting movement which was growing across London at that time in response to unaffordable rents and huge numbers of empty properties. SCH acted as a sort of benign surrogate landlord. I remember that I sneaked in, jumping the ‘waiting list’, because I knew people in the house. My reward was an attic room with so many leaks in the roof that I had to thread my way through a maze of buckets and assorted pots and pans catching drips to get to bed in the only dry corner of the room.

Short-life licensed squats turned over pretty quickly and we were re-housed (or should it be re-squatted.) by SCH in a property on Camden Park Road. We had by then become a sort of informal communal house – we had a kitty for bread, milk, tea and coffee, an expectation that the cleaning was shared if not actually a rota for doing it and the occasional communal meal when we were all in. Though the prospect of having to cook vegetarian wholefood cuisine meant I avoided being cook as much as possible.

We also started getting involved with the North London squatters movement, which was remarkably well organised at the time, there was a repairs team you could call on who would sort out basic services and instruct you on how to do your own repairs, lend you ladders etc. There was also the Ruff Tuff Cream Puff squatters estate agents, run by the poet-activist Heathcote Williams, that had a shop (squatted of course.) and put out a mag advertising desirable Squats: “empty 2 years/entry through rear/no roof/suit astronomer.” 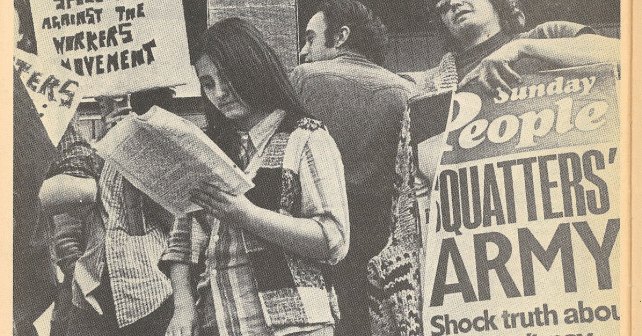 This post is part of my personal story of how I got into communal living
– and what happened when I did. You can click through to the next post at the bottom of each one. Or you can navigate through the panel on the side of the page.

Next post Not dirty hippie squatters at all  Here

More info on Squatting in the 1970’s can be found here: UK Squatting Archive

Parts of this story were first published in Communes Britannica :A History of Communal Living in Britain 1939-2000