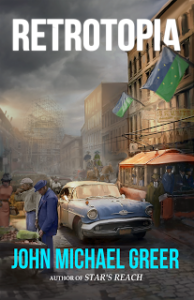 In the last few weeks I have been reading John Micheal Greer‘s utopian novel Retrotopia – set in a future where the USA has collapsed into a number of separate states the lead character takes us on a tour of the Lakeland Republic where to survive in the Post – civil-war/oil/….well post lots of things world the citizens of the new republic have chosen to go back to the future. Reading it I was struck by its (probably deliberate) mirroring of two books from another era. In the late 19th century two visions of utopia did battle for the popular and particularly the socialist imagination, as illustrated in the two most widely read and influential utopian stories of the time, Looking Backward and News From Nowhere.

From cradle to grave
Looking Backward 2000-1887, by the American Edward Bellamy, published in 1888, depicted a state-managed capitalist utopia which through a bloodless and gradual revolution had transformed America. In the new model America, depicted by Bellamy, everyone is conscripted into the `industrial army’ until they retire at 45 to live a life of leisure until they are 80 or 90. Army recruits take care of all jobs including domestic work, freeing women from domestic slavery. Each family lives in elegant private rooms, and eats exquisite a la carte fare in communal dining-houses. Everything is paid for by credit card – cash having been abolished. Each year everyone’s card is credited with his or her share of the nation’s annual product. Goods are ordered from ‘sample stores

‘ – huge luxury malls with fountains, frescoes and statues where all goods are displayed. To purchase an item that you desire you simply fill in an order form and the goods are delivered directly from the warehouse to your apartment through ‘electric tubes’. This consumer utopia has been made possible by advanced use of machinery, with such technical advances as ‘music by telephone’. With each citizen having an equality of spending power, crime against property has been almost eradicated and along with it most of the legal profession.
Bellamy had abandoned a career in law to become a journalist & writer. He had a fascination with military discipline reflecting his upbringing in post-Civil War America and this and his lifelong struggle with ill health all come out in his vision. He gave voice to a collectivist vision where ‘the nation guarantees the nurture, education and comfortable maintenance of every citizen from the cradle to the grave’.This was a reaction against the nineteenth-century individualism of Romantics. He preached instead a religion of solidarity, where `All men who do their best, do the same’ and salvation is to be reached by becoming part of the egalitarian masses. Looking Backwards struck a chord with many people being widely read and translated into all major languages, including Russian, Bulgarian and Arabic. It became the manifesto of the Nationalist Movement in America, inspiring the formation of the People’s Party, and was seen as an authoritative picture of what socialism would be like.

Organised with a vengeance
Some however did not greet Bellamy’s vision with much enthusiasm.
“(He) conceives of the change to socialism as taking place without any breakdown of (modern) Life, or indeed disturbance of it, by means of the final development of the great private monopolies which are such a feature of the present day. He supposes that these must necessarily be transformed into one great monopoly which will include the whole people and be worked for the benefit of the people . . …The great change having thus peaceably and fatalistically taken place, the author has put forward his scheme of the organisation of life; which is organised with a vengeance….”
William Morris reviewing Looking Backwards in Commonweal Jan 22 1889. 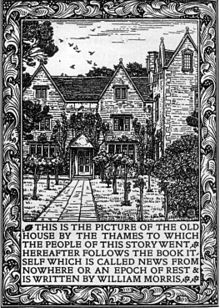 Morris’s counterblast vision News from Nowhere ‘serialised in Commonweal’ used the same technique as Looking Backward, of the present day dreamer waking up in the future, but Morris’s future was in sharp contrast to Bellamy’s. Waking to find himself in London, some 150 years after a violent revolution had overthrown capitalism in 1952, Morris’s hero is guided through the streets of a regenerated city to the house of the historian, old Hammond, who proceeds to answer his questions on the new life and how it was attained. London by now is a green city, Kensington is wooded, blackbirds sing in Piccadilly, salmon abound in the Thames and Trafalgar Square has become an apricot orchard. Hammond outlines how the Federation of Combined Workers took over after the ruling class had tried to cling to power through a military government. Following a popular uprising the country was re-organised through decentralised neighbourhood councils, or motes, with central government withering away, along with the law courts, police, military and prisons. All were no longer necessary following the abolition of private property.

The clearing of misery
The towns had been regenerated in a program known as ‘The Clearing of Misery’, an event that is still celebrated 150 years later. ‘On that day we have music and dancing, and merry games and happy feasting on the site of some of the worst of the old slums, the traditional memory of which we have kept. On that occasion the custom is for the prettiest girls to sing some of the old revolutionary songs, and those which were the groans of the discontented once so hopeless, on the very spots where those terrible crimes of class-murder were committed day by day for so many years.’

The slums were replaced by neo-historical style buildings with ample gardens & surrounding green space, the best old buildings have been preserved or restored, except for the Houses of Parliament which have been turned into a ‘Dung Market’. The slum dwellers repopulated the countryside, leading to the decentralisation of services and healing the age-old rift between town & country. Meanwhile the open spaces and ‘wastes’ have been protected for all to enjoy. In the new socialist society relations between the sexes have been transformed; marriage being a matter of choice and divorce disappearing along with other property disputes. Women’s emancipation is taken for granted, though Morris seems to think that women given free choice would choose to stay at home in domestic bliss. Later however we do meet a female construction worker carving panels for a new house.

Contrary to later opinion Morris’s utopia, whilst retro-medieval in appearance, was not anti-technology. Hammond points out that ‘All work which it would be irksome to do by hand is done by immensely improved machinery’. ‘Force’ barges ply their way up and down the Thames carrying goods from small craft workshops and water powered mills that line the banks of the river. This shows Morris as being more concerned about the control of technology and its effects on the dignity of labour, rather than being simply anti-machine. The story recasts Morris’s own experiences often with subtle jokes at his own expense, ending with a journey up the Thames to Morris’s own house at Kelmscott, where during an idyllic harvest festival the dream fades and the hero finds himself back in the poverty & degradation of the 19th century.

“if others can see it as I have seen it, then it may be called a vision rather that a Dream.”   Last line of News from Nowhere.

These two very different visions of a socialist future enthused their followers in turn; Bellamy’s being embraced by the Fabians in Britain and informing the early Labour Party; Morris’s altogether more romantic vision inspiring generations of artists, craftworkers and simple-life dreamers. And whilst few have heard of Looking Backwards, News from Nowhere is still in print a century later.

If you want a copy of News From Nowhere – get it from the bookshop of the same name http://www.newsfromnowhere.org.uk/