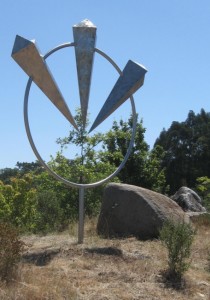 As we drive toward Tamera the roads get narrower and less well maintained, finally turning into a dirt track. It starts to feel like we are a long way from anywhere, but that could just be the low population of the region and me comparing it to the somewhat more overcrowded island that is the UK. We pass a simple sculpture set among some large rocks and there is what seems to me at the time to be a subtle change in the landscape, but I realise later is really a dramatic and fundamental change that the community has created – in comparison to the surrounding countryside we have just driven through Tamera is green.

Tamera has 170 members living on 330 acres. They describe themselves as a School and Research Station for Realistic Utopia – what that means in reality is that they have a whole long list of projects and elements to the work that they do all with different names, which can feel somewhat confusing at first. There is the Terra Nova School, the Global Campus, the Healing Biotopes plan, the solar village project, the international peace project to name a few of the more public faces of the community. I discover later in conversation with various members that there is an equally impressive set of internal groupings researching and working on different aspects of community life. Whilst the community was established in Portugal in 1995 its roots go back to the student movement in Germany in the late 1960’s and 70’s and involved an early cultural experiment known as Bauhutte experiment (1979-1986), operating an intentional community on a farm first near Stuttgart and later in the southern Black Forest of Germany. This phase of the project ended in 1986 under allegations of being a sex cult (the owner refused to renew the lease on the farm).  Members of the group went on to form the Zegg Community and Centre For Experimental Cultural and Social Design in the former East Germany in 1990. 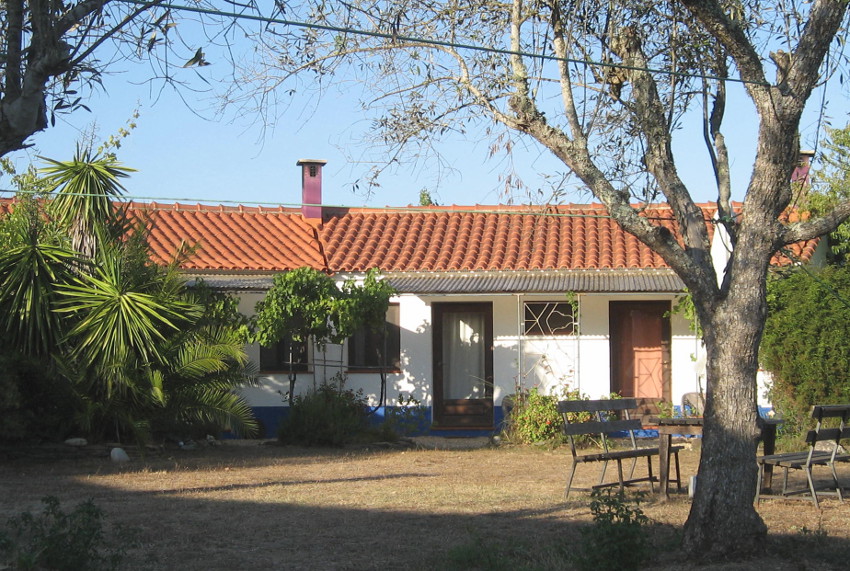 I found much of this background out from conversations with members and reading some of the books in the guest house, having deliberately not done much research prior to my trip, wanting to be able to be able to see the community on the ground without too many preconceptions. I get settled in to the guest rooms which are housed in the some of the original converted farm buildings; join for the communal meal at the open air dining room and after a quick chat and a beer in the social area bar I head of to bed to sleep off the travel tiredness.

The following day I was given a tour by Sham-ba, part of the Tamera ICSA conference team who acted as my host during my visit (Thanks Sham-ba). Now as a Diggers & Dreamers editor for the last 25 years I have been on more than a few community tours in my time – but I can honestly say I have never been on one that impressed me more than my tour of Tamera.  Where to start?

– OK – The biggest impact visually, environmentally and probably in the long term potentially politically in the region is the water retention landscape management of the site that is based on the work of the Austrian permaculture farmer and designer Sepp Holzer. While the Alentejo region is suffering from encroaching desertification it has a similar annual rainfall as Berlin. The problem being that it all falls in a concentrated period in the winter and runs off the land – the solution capture the water on the land by building what are fairly small dams and creating a series of lakes.

I was told a story that some members were concerned about bringing in heavy digging equipment in to construct the dams – to which Sepp Holzer’s reply was along the lines of “We have trashed the earth with heavy equipment, we don’t have the time to repair it with teaspoons.”

The result in just a few years since the lakes filled up is stunning. The water table has risen around the lakes allowing food to begin to be grown on former dry grass land and a walk along the boundary with the neighbouring farm showed an almost sharp green line between the two. 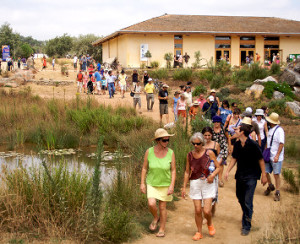 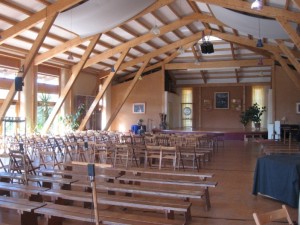 On to the Solar Village in ‘Testfield 1’ – where a small group of 30 are experimenting with living ‘off-grid’ using only technology that you could imagine DIYing yourself in a small workshop (So no solar PV). Using a combination of direct solar using parabolic mirrors, small scale biodigesters and stirling engines they are hoping to create a sustainable lifestyle that can then be replicated across Tamera and beyond. 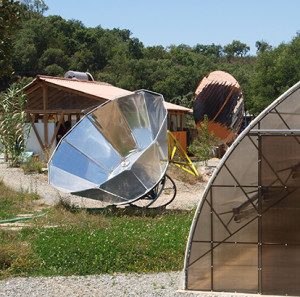 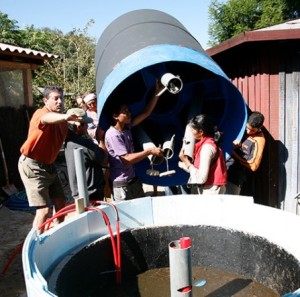 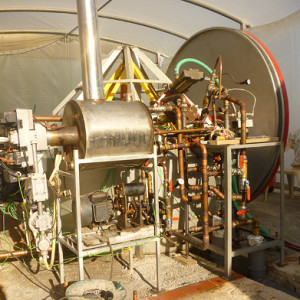 In between I get to see the Global Campus conference facilities and accommodation that will be available for the ICSA Conference. The site and the scope of the communities work is such that it takes three separate tours to take in most of the community. I take a visitors tour of the water management landscape and gardens and later in my stay Sham-ba introduces me to the new ‘megalithic’ stone circle – it was like being shown around the Callanish stones on Orkney, but by one of the people who had erected them and could explain the meaning of each stone.

There are also the Art School, the Horse Project, the Institute for Global Peace Work, and then the more private community areas such as the Political Ashram and the Place of the Children – and the more intangible things you can’t actually see on a tour; the work around love and sexuality and Feminine Peace Wisdom. Check out the Tamera website or their latest newsletter for more information on all of the above (and more.)

What struck me most about my visit was what is really summed up in the words “School and Research Station”. The thread of constant learning that seems to run through all the work going on at Tamera and throughout its history. That is there at the end of their vision statement when they say “The most important attributes of an alive cultural concept are its productive incompleteness and its openness to change, self-correction and development. We are still a ways away from reaching our goal. “

So here looking forward to visiting again this summer at the conference and seeing again glimpses of what a realistic utopia might be like.